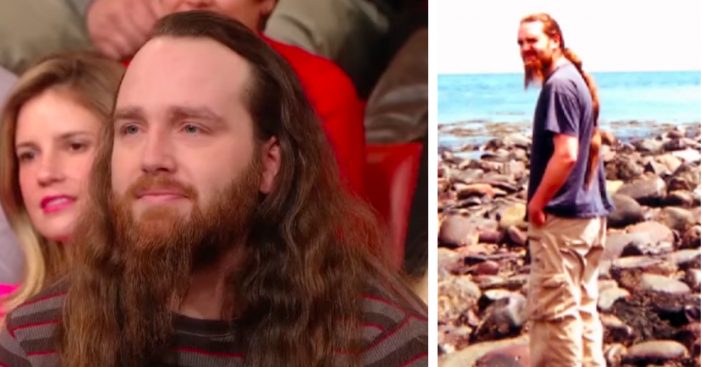 Roger hadn’t cut his hair in 20 years! His hair was pretty much down to his waist and he also had a long, straggly beard to match. He was a guest alongside his wife on the Rachael Ray Show to talk about why inspired him to not cut his hair for 20 years.

When asked about why he hasn’t cut his hair for so long, he simply said that he shaved his head after high school and let it grow from there. “Life happens, you know,” Roger says, getting into the story of how he met his wife, kids came along, and before you know it, you’re too busy to worry about hair.

A professor hair stylist was brought on the show to evaluate Roger’s look and really loved what he had to work with. “He’s got great hair, he’s got great eyes,” the stylist says. He follows up with that by saying he’s got to ‘get that ZZ Top thing off’, which earns a laugh from the audience, even from Roger! He also states that since Roger has naturally wavy hair, he’s curious to see what happens when the extra weight comes off. He says he’d like to leave something to play with and not just go straight buzzcut.

The result is out of this world.

When Roger struts out, the audience erupts in applause and his wife is in absolute shock and tears. “You are smoking hot!” Rachael exclaims. We think everyone else agrees.

What’s even better is that at the time of the reveal, Roger hadn’t even seen himself yet. His own reaction to himself is even better.

He knows he looks good!

He was still cute before, but this look really brought out his true colors and his confidence!

Believe it or not, many comments were about the dimples hiding underneath his beard. We have to admit, they look stunning on him!

The transformation even sparked a comment about physical appearance and self-worth. Pretty eye-opening.

One thing we know for sure is that hair can make or break you, and this guy’s day was just made.

Previous article: Breaking: Playwright Neil Simon, creator of ‘The Odd Couple,’ Dies At Age 91
Next Post: What Do Those ‘No Antibiotics’ Labels Really Mean?