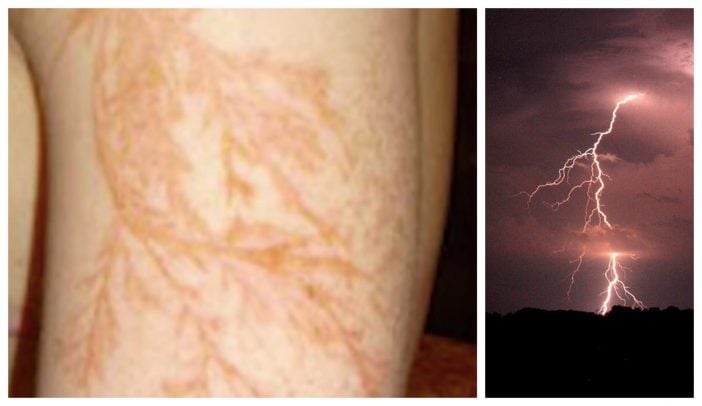 One of the side effects include forgetfulness, which brings us to the story of a young man who was struck by lightning and doesn’t even remember it! 13-year-old Josiah Wiedman was sent 9 feet into the air when a jolt of lightning struck him. He was knocked unconscious and all he remembers is feeling heat on his body. Everything else he recalls in his story to ABC News is what other people told him.

“As we were walking, I got struck … sending me 9 feet into the air, making me bounce on my head and then flip over to my back. All I remember is just a little bit of heat — but barely,” Josiah recalls. The initial report of Josiah’s state was that he was not going to survive. He suffered a fractured skull and a concussion. There have been many other similar news reports on survivors of lightning strikes.

Often times a lightning strike can result in some scarring that literally looks like a sporadic lightning strike. While some people do remember some aspects of their encounter with lightning and others don’t, the way they describe what they can remember is chilling.

“I was convinced my body had become soup inside my clothes,” said Betsy Smith

“…being stung by 10,000 wasps from the inside out,” said Phil Broscovak

It should be noted that since all lightning strike victim’s stories being different, the level of severity differs from person to person. One happened to 13-year-old Josiah Wiedman, one of the luckier ones, may not happen to you if you find yourself in lightning’s clutches.

Be sure to SHARE this article to spread awareness about surviving lightning strikes and what you can do to prevent them!

Previous article: Man Creates ‘Amish Uber’ Out Of Buggy And Horse
Next Post: Chip Gaines Shares Adorable Photo Of Himself With Newborn Son Sleeping On Hammock