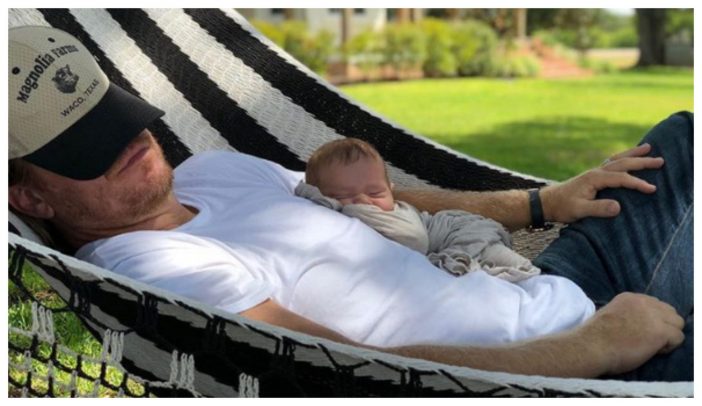 Joanna Gaines recently showed off her new baby boy Crew in a series of snaps to her Instagram. Now Chip Gaines is hopping on the bandwagon and posting some pictures with his new son as well! In the photo the pair are snuggled up on a hammock, perfectly content and probably out cold.

The Instagram post was captioned with “#thegoodolddays” as the two snoozed the day away. It’s no secret that Joanna probably snapped this picture of the two, and we’re all hoping there will be plenty more to come! See the adorable picture below!

The Gaines are no strangers to sharing their family on social media. New mama Joanna is more apt to post a slew of baby photos than Chip is, but there’s no doubt both of them want to show off their new son- and they totally should! Baby Crew is now 7 weeks old and fans of the Gaines family are just gushing over him.

Not only are the fans swooning over the new family addition, but the rest of Crew’s siblings are clearly loving on him, too! It’s safe to say this family has a love for cuddling and closeness. We aren’t complaining!

Chip opened up in an interview with Magnolia Journal about the idea of leaving his kids, Duke, Emmie Kay, 8, Ella Rose, 11, and Drake, 13, at home while he goes to work. He says that he typically gets weird looks from others when he brings his kids to work, but simply says, “there’s too much at stake to be bothered by what other people think.” He prefers to keep his kids right by him, no matter the situation, and that’s a loving father right there.

Joanna and Chip Gaines are the hosts of the hit HGTV show Fixer Upper. It takes place in their current home state of Waco, TX, where they take run-down, cruddy homes and turn them into a stunning renovation that the buyers can’t help but move into. The show has done so well that in 2017 the show received a spin-off series called Fixer Upper: Behind the Design and it premiered in April 2018.

Be sure to SHARE this article if you’re in love with the Gaines’ baby Crew photos!

Previous article: How To Survive A Lightning Strike And How To Prevent Yourself From Encountering One
Next Post: McDonald’s Is Testing Out A New French Toast Breakfast Sandwich