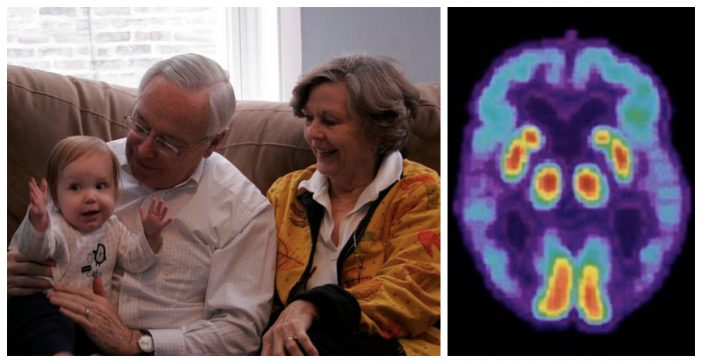 We reported awhile back about a study that confirmed grandparents who cared for their grandkids lived longer.  Now, a study shows that babysitting grandchildren could additionally lower the risk for Alzheimer’s.

Alzheimer’s is a progressive disease that destroys the memory and other important mental functions and capabilities. Treatment can help an individual with Alzheimer’s, but it cannot be cured. Researchers from the Women’s Health Aging Project in Australia conducted the study to observe over 180 women who cared for their grandchildren.

The results from the study concluded the postmenopausal women who took care of their grandchildren once a week showed a lower risk of developing Alzheimer’s. However, what’s interesting is that those who spend more than 5 days per week caring for their grandchildren may develop neurodegenerative disorders.

It is thought that regular social interaction can have positive effects on the mental health of seniors and lower their overall risk for Alzheimer’s. Thus, caring for grandchildren can help to prevent any social isolation that can cause a slew of mental disorders and even a premature death.

Other research suggests that a strong grandchild and grandparent relationship has anti-depressive benefits. The Institute on Aging at Boston College observed 376 grandparents and 340 children for 19 years. They found that the closer the relationship, the less likely both sides were to develop depression or any other mental illness.

Alzheimer’s Net provides a list of fun things that grandparents and grandchildren to do together, including camping in your own backyard, playing a card game, or teaching your grandkid one of your favorite hobbies.

In conclusion, the study shows that spending an appropriate amount of time with your grandkids may prevent Alzheimer’s by increasing overall brain function and memory. While it can be mentally exhausting to care for your grandchildren too often, it’s important to find a happy medium that is beneficial for you.

Be sure to SHARE this article if you found this Alzheimer’s study interesting!