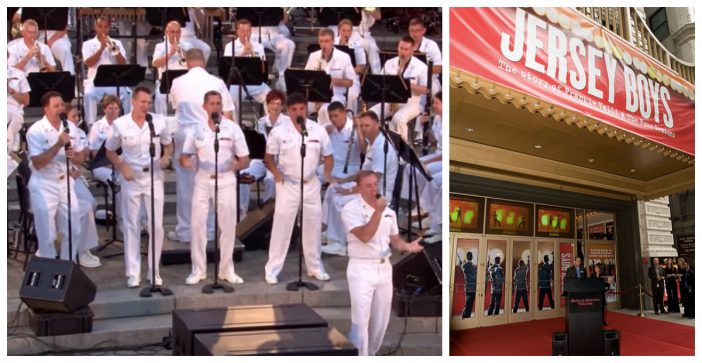 As if we needed another reason to love the men and women who serve our nation. They just gave it to us! The U.S. Navy Band just performed selections from the Broadway musical hit Jersey Boys and it had everyone in the crowd jamming out.

Most people would think of the military as being very serious, but this performance just proves all of that wrong. These men broke out in song with a big band behind them singing songs from Frankie Valli’s and The Four Seasons, featured in Jersey Boys, including the famous “Oh, What A Night”.

The official chorus for the Navy called The Sea Chanters was formed in 1956. According to the Navy, The Sea Chanters’ main focus is to “inspire patriotism, elevate esprit de corps, enhance Navy awareness and public relations, …  and project a positive image at home and abroad.” They sing pretty much everything from choral pieces to opera to contemporary.

This performance actually took place in 2015 and it has received over 6 million views since. The Navy holds The Sea Chanters near and dear to them, saying, “Throughout their history, the Sea Chanters have remained true to the Navy’s watchwords of pride and professionalism, and they continue to flourish as a vibrant ensemble.”

“Oh, What A Night” didn’t come until the tail end of the performance, which sparked a collective audience clapping along with the music. You could clearly see many people, young and old, singing the words to the song. It’s certainly a well-known classic! The performance also included some syncopated choreography from the soloist’s backup singers.

It’s safe to say the United States Navy knows the classics! Be sure to SHARE this article if you love our Navy!