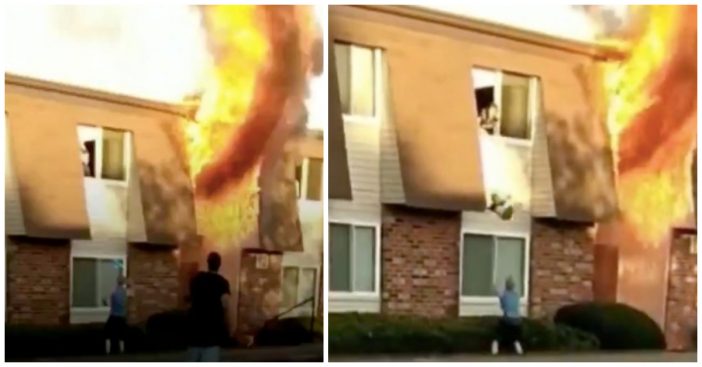 A terrified mother threw her 11-month-old baby from the window of a burning flat right into the arms of a neighbor. The neighbor is believed to be a former Marine.

The fire started in Ashford Cove Apartment Homes in Anderson, South Carolina. The fire started when someone was cooking, and it couldn’t be put out with a fire extinguisher. The fire began to get out of control, and because the door was open, it spread throughout the apartment building.

Dramatic video shows a man catching a baby that was dropped out of an apartment window during a fire in South Carolina. An eyewitness said the mother of the child also jumped out of the window. pic.twitter.com/fsXHOlctAr

When a mom upstairs realized there was a fire, she tried to run down the stairs but they were already full of flames. She was trapped inside so she turned to the window for help. When she saw a neighbor standing below her window, she dropped her baby to safety.

This was all caught on film and the footage is amazing. The filming stopped after the baby was caught, but it was reported that the mom jumped out of the window as well. The baby and the mother were not injured at all.

Eight flats were damaged and eight families have to relocate for the time being. No one was injured. A dog, cat, and turtle were also rescued from the apartments. The only hospitalization was for an ambulance worker who faced heat exhaustion from the flames.

It’s amazing that nobody was injured in this fire, especially given the size of the flames! Everyone in this story acted heroically. Thank goodness the mom and the Marine both thought quickly.

Firefighters say that one apartment was heavily damaged and three others had a lot of smoke damage. A few of the other apartments need some work done too.

What amazing footage and a brave act by that Marine neighbor! What do you think of this story? What would you do if this happened to you? If you think this Marine is a true hero, please share this article with a friend!

Previous article: Lisa Marie Presley Opens Up About Her ‘Intense Lioness Mother’ Parenting Style
Next Post: Dwayne ‘The Rock’ Johnson Spoon Feeds Girlfriend So She Can Breastfeed Their 8-Week-Old Daughter