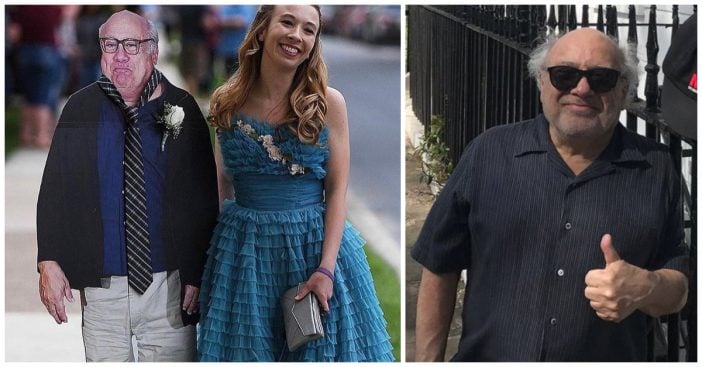 Danny DeVito, we love your work! And so does Allison Closs, who brought a cardboard cutout of the iconic actor to prom with her.

The cutout was done up entirely with a tie and boutonniere.  It was wheeled around on one of those plastic scooters and they posed for couples photos. There is nothing funnier than this hysterical prom photo!

We’ve got to admit, they’re both dressed to the nines! What’s even better about this story is that it went viral, and Danny DeVito himself saw the photo and reacted as one normally would.

Danny Devito made a cardboard cutout of Allison and took her to set. He made sure Allison would see his response. The caption read, “Hey Allison- I heard you took cardboard Danny to Prom. What a coincidence. I took cardboard Allison to Paddy’s…”

Thank you SO, SO MUCH @RMcElhenney and @DannyDeVito for fulfilling my dream of visiting Paddy’s Pub from @alwayssunny !! 🤩 pic.twitter.com/EJiLZ3V4Qy

Allison was happy beyond belief that her photo was seen by Danny, and even more that he responded.

In a recent YouTube video, Allison stated that she was having trouble finding a date to prom. So, what better alternative than a cardboard cutout of your favorite celebrity? Allison might be onto something here…

Allison went on to say that Danny DeVito’s work was there for her in her darkest moments, and for that she’s grateful and indebted. She claims that he is a huge inspiration for her and is always there when need be. Now, he’s in cutout form, too!

London with my DN hat. Jeremy June 8th. Show us how it's done! pic.twitter.com/dYM4XQXEEq

It’s safe to say that cardboard cutouts might begin to replace actual prom dates. Who needs to stress of finding a date when you can take a cutout of your favorite celebrity?

Did you find this story absolutely hilarious? Make sure to share it with your friends and family if you did!

Previous article: Adorable Footage Of Prince Harry As A Boy Will Remind You Just How Silly The Duke Is At Heart
Next Post: Jerry Maren, The Last Living ‘Wizard Of Oz’ Munchkin, Died at 98 One Year Ago