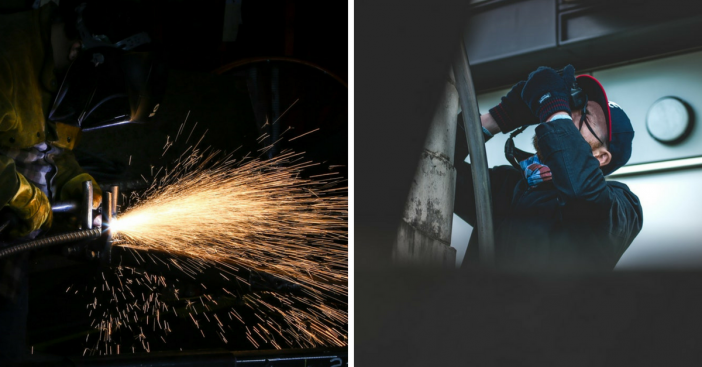 Some jobs are obviously more dangerous than others. Do you know if your job is one of the most dangerous in the world?

These jobs might not look as dangerous as they are, but don’t be fooled! Which of these do you think is the most dangerous?

Lumberjacks must use heavy and dangerous machinery, climb trees and be around falling heavy trees. In 2016, the Bureau of Labor Statistics (BLS) reported that an average of 135.9 out of 100,000 deaths. Most deaths are from falling trees or equipment errors.

Welders, especially underwater welders, are very susceptible to injuries and accidents. Usually, electricity and water don’t mix, but it is part of the job for underwater welders. They face many dangers including explosions and different pressure hazards. Underwater welders die at a rate of 40 times higher than America’s national average.

Roofers obviously have to walk on home and office building roofs, so it is no surprise that they have the fourth highest rate of fatalities on the job in the United States. 100 workers died in 2016, most from falling.

Vets are exposed to animal bites, infections, and illnesses but mental health can also play a part. High stress, financial strain and emotional hardships associated with euthanasia can be the leading cause of suicides in vets. According to the Australian Vternarity Association, vets are up to four times more likely to commit suicide than the rest of the population.

No surprise here. Police officers encounter the most dangerous criminals and situations and are murdered more than any other profession. According to the BLS, “Police officers incurred 51 homicides in 2016, up 50 percent from 34 fatalities in 2015.”

Truck drivers had the highest number of deaths on the job in 2016 than any other occupation in the United States, with a death rate of 24.7 per 100,000 workers. This is because they carry heavy and dangerous loads, drive when tired and are driving so much they are more prone to being in a deadly accident.

Taking care of parks and outdoor areas may seem harmless, but according to the BLS 217 total fatalities were reported in 2016. Most of these deaths were due to falls, electrocutions, transportation accidents or being struck by loose objects.

Private Investigators must follow dangerous people around at all hours. They often do work on their own with no backup and catch people doing terrible or even illegal acts. Some of the dangers they face on a regular basis are demanding work schedules, violent people, getting into car accidents or extreme temperatures while hiding out.

Which job do you think is the most dangerous? If you enjoyed this article, SHARE it with a friend!