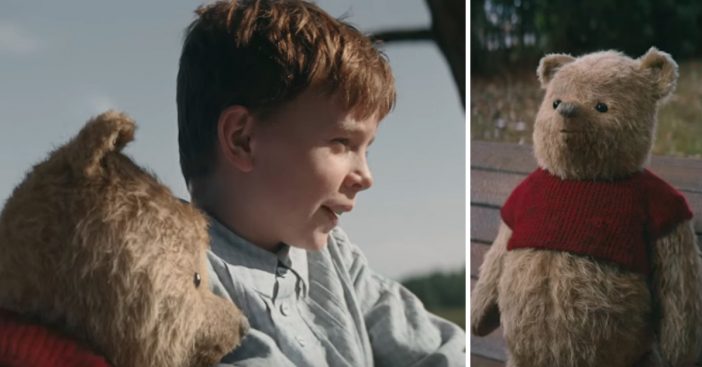 Do you remember the first time you read a Winnie the Pooh book or watched one of the cartoons? Winnie the Pooh has been around since the 1920s and chances are, he was a big part of your childhood.

The books have been passed down from generation to generation and still be appreciated nearly 100 years later. If you didn’t read the books, surely you’ve seen either some of the movies or the TV show. Now, a new Winnie the Pooh movie is coming and the trailer might just make you cry!

The character of Winnie the Pooh was created by author A.A. Milne based on a teddy bear that his son, Christopher Robin Milne, had. A.A. included his son’s author toys, Piglet, Kanga, Roo, Eeyore, and Tigger, into the stories and created two additional characters, Owl and Rabbit. When he first debuted, Winnie did not have the red shirt he is so well-known for wearing. He didn’t get his red shirt until 1930!

Nowadays, we don’t typically associate the characters from Winnie the Pooh with the original illustrations, but instead the Disney versions.

Disney gained rights to Winnie the Pooh (and dropped the hyphens from his name) in 1961 and have had the rights to the character and properties ever since. By 1966, Walt Disney Productions had gained film rights and began producing theatrical featurettes, a television series, and direct-to-video films.

In the film, he is an adult with a family of his own, but Christopher has lost his sense of imagination and his priorities have gone askew. Winnie and his friends re-enter his life to help Christopher find his way.

The full trailer for Christopher Robin was released on May 25, 2018, and it will make you feel incredible levels of nostalgia. Winnie does wear the little red shirt, but the live-action Pooh looks like more like the original illustrated version of the character that we first met in 1926.

Christopher Robin is scheduled to release on August 3, 2018. Do you plan to see the movie in theaters?

Watch the full trailer for Christopher Robin in the video below. Please SHARE this on Facebook with your friends and family members that love Winnie the Pooh!