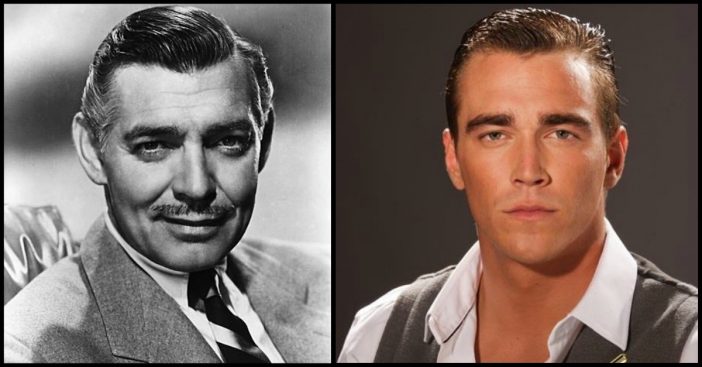 Clark Gable, one of the most famous actors of all time, fathered a son, John Clark Gable, after he passed away in 1960. John was the child of Clark and Kay Williams. John Clark Gable went on to have two children, Kayley Gable and Clark James Gable (Clark Gable III). UPDATE 2/26/19 Clark Gable III, grandson of acting legend, dies at the young age of 30. Dallas County Southwestern Institute of Forensic Science says the 30-year-old Gable died Friday at a Dallas hospital. The medical examiner’s office didn’t immediately indicate the cause and manner of death, but it was not considered suspicious. Read below for a tribute to this young man and the legacy he was born into. More Info On This Tragic News To Come…

Clark Gable rose to fame in 1931, and he went on to become “The King of Hollywood.” Before he died in 1960, he had starred in over 60 films. Some of his most famous movies include Gone with the Wind, Mutiny on the Bounty, Saratoga, Boom Town, and The Misfits.

Clark worked with some of the most well-known women in Hollywood, like Lana Turner, Joan Crawford, Myrna Loy, Ava Gardner, and Marilyn Monroe.

As “The King of Hollywood,” Clark was known to be a bit of a womanizer. He was married five separate times, and fathered Judy Lewis out of wedlock. In 1955, Clark married actress Kay Williams. Before Clark passed away, Kay became pregnant with their son. John Clark Gable was born on March 20, 1961, four months after Clark passed away.

For the past few years, Clark has been working in the entertainment industry as a model, actor, and television presenter. He hosted the show Cheaters for seasons 13, 14, and 15.

Clark is also an entrepreneur; he owns a line of clothing and accessories, as well as a spy gear website.

In 2017, Clark Gable III took on his newest role: dad. His girlfriend, Summer, gave birth to their daughter, Shore LaRae Gable, on September 6, 2017.

Some people think that Clark looks just like his famous grandfather, but he doesn’t really see it. The one facial feature he does think he got from his grandfather? His eyebrows.

Do you see a resemblance between Clark Gable and his grandson, Clark James Gable? If you love Clark Gable’s movies, share this article with your friends!

Previous article: 10 Of The Best Homemade Weed Killers To Use In Your Garden
Next Post: Kathy Garver Opens Up About The Tragic Death Of Her “Family Affair” Co-Stars