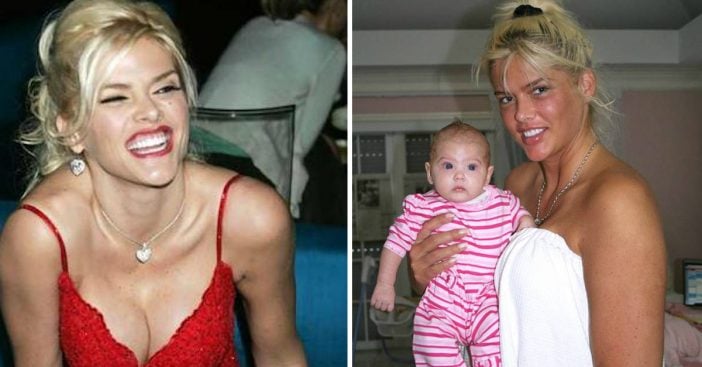 It has been 15 years since Anna Nicole Smith passed away on February 8, 2007, when her daughter was only five months old. Even though Dannielynn didn’t get much time with her mother, she could pass for her mini-me.

Anna Nicole Smith’s name is near-infamous these days, but before she rose to fame, she was Vickie Lynn Hogan. Then she was Nikki Hart! By the time she appeared in Playboy in 1992, she went by Vickie Smith. She later changed her name to the one we all know and love and it was around that time that Guess photographers realized she bore a striking resemblance to ‘50s blonde bombshell, Jayne Mansfield.

Aside from her successful modeling career, Anna Nicole was known for some public scandals. In 1991, she met billionaire J. Howard Marshall and began a two-year affair with him, before they finally got married in 1993 when J. Howard was 89 years old.

From then until Anna Nicole’s death, the blonde bombshell was in the media, either over the death of her son, or the paternity case of her daughter, Dannielynn.

Dannielynn’s paternity was a widely publicized case. After months, Larry Birkhead was granted a DNA test and proved to be Dannielynn’s father — he could not possibly be a more doting dad!

In the year after Smith’s death, Larry and Dannielynn were closely monitored by the media to see how the little girl was adjusting after everything (somehow impossibly, Dannielynn actually turned 15  this year!). Larry Birkhead and Dannielynn have attended the Kentucky Derby together over the years, as Larry is a Kentucky-native. Recently the father-duo daughter were once again in attendance, and it is amazing to see what Dannielynn looks like now! She is a perfect blend of both of her parents.

Catching up with Dannielynn

She’s taken after her parents in other ways. When she was just six years old, Dannielynn became a model with the company Guess Kids, the childrens’ branch off of Guess clothing. Co-founder Paul Marciano would note of the experience that “Dannielynn has the same playful spirit that her mother had on a set.”

A judge turned down her hoped-for receiving of $44 million from the estate of the late E. Pierce Marshall, and while her father hoped the ruling would go in another direction, Dannielynn has found her own footing without it. It seems she has a knack for acting, as her father outlined, “I got an email from her teacher [that] said, ‘Dannielynn gave one of the most believable performances of the whole entire school that was in the play.'” While he only offered, “If she wants to do something like that when she’s older, I’ll have my own opinion about it,” Dannielynn just about has her mind made up, especially that it’s “really cool” to “act as a character and not yourself.” As far as she’s concerned, “It’s like portraying a new person. It’s fun.”

Her father’s already had to contend with his little girl growing up, reminiscing of their Kentucky Derby trip, “She said she wanted to wear something entirely different than she had in the past. I guess that means no more ‘little girl’ dresses??”

Still, he’s had no problem providing for her, and his famous daughter got to spend her birthday in 2019 in style seeing the Broadway production Hamilton. That same summer, she graduated from the seventh grade. Congratulations! Her father admits things can be challenging, but adds, “I make it as normal as I can.” That means typical teenager things like seeing movies and rushing to classes before the first bell rings. “She goes to school like every other kid,” he went on. “She’s a Girl Scout.”