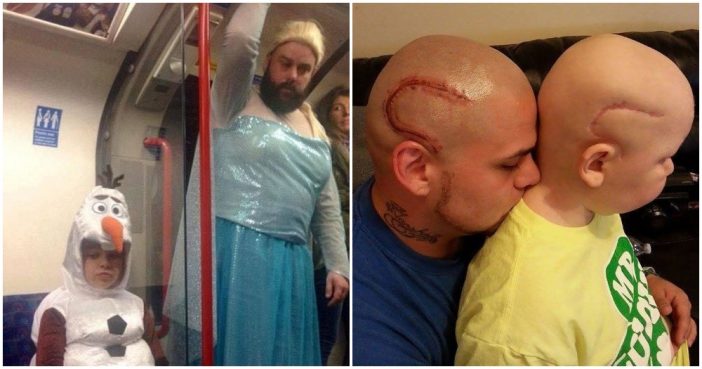 This story was originally written by Camila Villafane for Lifebuzz.com
Fathers aren’t often considered the ones to be going up close with their children. The moms are the ones that are known for maintaining the right relationships with the children, while the main is supposed to be outdoors most of the time. However, here we have a list of 15 dads that defy odds to be present with their children and deserve the FOTY award.

In lieu of waving bye to his son before he went to school, Dale Price chose to do something totally radical. For every day of the school year, Price wore a different costume whenever his son went off to high school. He wore approximately 170 costumes in a year alone and they included characters like Terminator and Merida from the film “Brave.” Now, most high school kids would feel humiliated, but his son probably gave him points for effort.

2. Every Scar Tells A Story

This is Josh Marshall with his then 8-year-old son, Gabriel Marshall. In March 2015, Gabriel was diagnosed with a form of cancer called anaplastic astrocytoma, a rare malignant brain tumor. He was able to have successful surgery, but Gabriel admitted he felt like a “monster” because of a large scar he has as a result of his surgery. “This broke my heart,” Marshall said. The amazing father’s solution was to get a tattoo that resembled his son’s scar. “I told him if people wanted to stare, they could stare at both of us,” he said.

Nils Pickert didn’t react how some people would expect if they’d learned that their son loved wearing dresses and skirts. Instead of demanding his son wear pants, he chose to make him feel comfortable with himself by joining him. He even told The Huffington Post: “I care more about my boy being a self-assured, compassionate person. I couldn’t care less about the choices he makes on the way to becoming that person — as long as they cause no harm to himself or others.”

As a parent, you often have to lead by example, and teaching your child a lesson is the best part of being a dad. So when this little girl decided to put on shorts that were really short, he chose to show her some support by wearing short shorts too. Now if our dads had pulled this trick on us when we were in middle school or high school, we would have panicked and started wearing long pants. But hey, you live and learn as you go!

Dads are often shown on TV and in movies as dudes who like fishing, grilling, and watching football on Sundays. But the fact is that most dads are awesome because they’ll do whatever it takes to make their kids happy every day. Take this guy, for example. He decided to tap into his inner child and his love for Mario Kart and take it up a notch. Now, what child could resist playing with his very own race car that’s been covered in duct tape? Surely, this is a memory that this kid will treasure for the rest of his life.

Page Page 1 of 3
Previous article: People Have Been Creating Incredible Sculptures Out Of The Red Wax From Babybel Cheese
Next Post: It Was Just A Run-Down Old Motel — Until They Transformed It Into Apartments For Homeless Vets