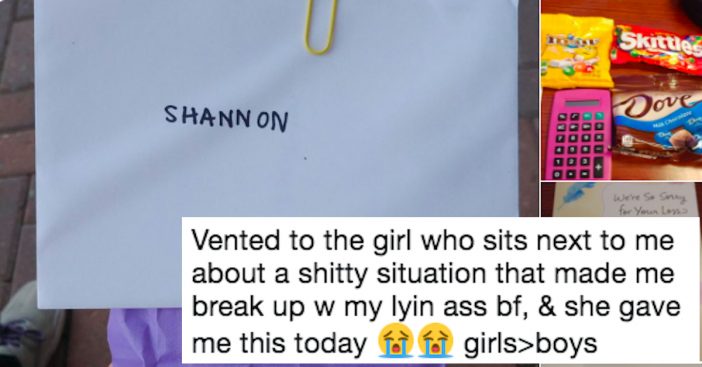 In this day and age, there is too much hatred in the world. People spew nasty words at each other, in person and online, without regard for how it can affect someone long term. With everything going on, we need to stand by each other and support each other any way that we can. It seems Twitter users have gotten behind this notion and are already sharing examples of unwavering support they’ve experienced or been a witness to.

In a Twitter thread that has gained a lot of traction, many have shared their examples of women supporting women. These moments will truly make you smile!

1. These girls who became friends after a boy’s dumb Snapchat mixup

I hung out with this guy a couple times last semester and this morning he tried to snapchat me and a bunch of other girls but accidentally started a huge groupchat and pic.twitter.com/CgSG5xGgro

2. This uber driver who did a lot more than drive someone around

I was driving for uber today & this girl gets in the car. I ask her hows her day been & she breaks down. She tells me that she flew alone from Texas to see a guy & he abandoned her so I did what I would want someone to do for me. I invited her to hang out with my friends & I.

3. This woman who literally got down on the ground to help someone else out

Some lass was complaining about her toes not being painted last night in the smoking shelter n then this happened. I LOVE GIRLS pic.twitter.com/ph25ALHEtF

4. This woman who knew exactly how to cheer her friend up (and killed two birds with one stone)

Girl on the train advising her friend who has had a crap day that she doesn’t have to choose between chicken kievs and pizza for dinner, put the chicken kiev on the pizza. That’s the kind of support you need after a tough one.

5. This girl who knew how to simply ask to be friends with someone else

she shot her shot for friendship and now we r besties 😩❤️❤️ pic.twitter.com/1j2JFLRxKL

6. When this woman wanted to be the most supportive fiancé

I suffer from anxiety but lately depression has severely taken over my mentality and instead of setting me off and not understanding, my fiancé is learning to educate herself with depression and if I’m not the luckiest person alive then idk who is 😭😭😭❤️❤️❤️❤️ pic.twitter.com/N0SAoFGXuu

7. This girl who shared with a total stranger

I got myself a wrap on my way home at 2am & a girl outside stopped me and said “my boyfriend’s stormed off. do you want his chips?” and she gave them to me and got in her uber alone and sped away into the night. i miss her.

8. These women who met while drinking, but also liked each other sober

last night, we hung out and actually got along sober!

9. When this woman saw a man trying to take advantage of a woman at a bar and stepped in

guy: …just one drink
me: no thank you
guy: come on it’s just a drink
me: look, i’m sorry I just want to read my book while i wait for my bf
guy: what ur bf doesn’t let you have friends?
random woman: Clara? Hi! *hugs* (whispers) u ok?

10. This sorority sister who is always prepared

A girl in my sorority once ran across campus to bring me a battery for my insulin pump because I was in lab, & today she pulled out a handful of batteries and said she carries them around just in case I need one and it’s honestly the nicest thing anyone’s ever done for me.

11. This girl who simply went the extra (Google) mile

I just left to go get a bagel wearing my “dump him” shirt and I passed a group of women having brunch who started yelling “dump him!!” at me so I stopped and said “right??!” and they yelled “yes!! dump him!!” anyway sometimes people are good

13. This girl who heard what someone was struggling with and decided to brighten their day

Vented to the girl who sits next to me about a shitty situation that made me break up w my lyin ass bf, & she gave me this today 😭😭 girls>boys pic.twitter.com/5LLHcprk3Z

14. This girl who tried to protect a stranger from a cheating scandal

So my boyfriend has a identical twin brother and someone thought my boyfriend was cheating on me but it was really his brother and his girlfriend 😂😂😂 thanks for having my back though girl ✊️ pic.twitter.com/kp3d4D6dmZ

15. When this woman was ready to fight off a gym creep

Ricky was just acting like he wasn’t my bf at the gym, saying to me “you look nice in those leggings, can I take you out some time?”
This girl (that I don’t know) comes up to me and says “hey you ready to leave?”
I informed her he was my bf
BUT GIRL I APPRECIATE YOU

Previous article: This Is How You Can Watch The Royal Wedding
Next Post: Nicole Kidman Knew She Wanted To Marry Keith Urban After 1 Month Of Dating