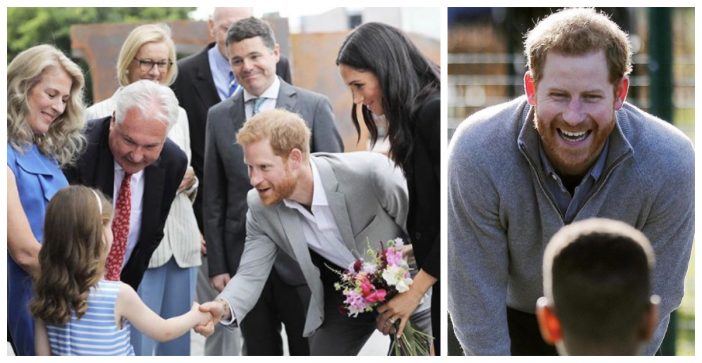 Prince Harry, Duke of Sussex, has only been married for a few months, but everyone’s waiting for a pregnancy announcement from him and his wife Meghan, the Duchess of Sussex. While that may not come for quite awhile, the Internet is feeding themselves full of heartwarming “uncle” moments from Prince Harry that prove he’ll be an awesome dad.

He’s an uncle to the three royal musketeers, Prince George, Princess Charlotte, and the newest addition, Prince Louis. Here are the top moments that will prove Prince Harry to be an incredible father one day!

1. When he dished on 5-day-old Prince George

Prince Harry may have been more excited for Prince George’s birth than William, the Duke of Cambridge, and Catherine, the Duchess of Cambridge, were. He dished to BBC that he had already cuddled his newest and first nephew just five days after he was born.

2. When he joked about becoming a babysitter

After Prince George was born, he joked (or did he?) about becoming a babysitter. He told BBC at the time, “I only hope my brother knows how expensive my babysitting charges are.”

3. When he said he wanted to be the “fun uncle”

4. When he shared his best royal advice for his niece and nephew

According to the Mirror, after Princess Charlotte was born, Prince Harry shared his best royal advice for his nephew and newest niece. He said in a statement, “As an uncle, you know, I would say enjoy the role, because at first it’s just pressure, pressure, pressure … Just enjoy it and make the most of it. If you’re going to be doing it and you’re having an effect on so many people then, if you smile, they’re smiling — and what’s the point of doing such a unique job without enjoying it?”

5. When he and Meghan honored their nieces & nephews at their wedding

The Duke and Duchess of Sussex with the Bridesmaids and Page Boys, taken by photographer Alexi Lubomirski in the Green Drawing Room of Windsor Castle. #RoyalWedding pic.twitter.com/nFaPQSIzVl

Per their unique request, the bridal party for the Royal Wedding consisted of Prince George, Princess Charlotte, and other children they are close with. Prince Louis was just a wee bit too little to join to the party.

6. When he called his niece and nephew the “most amazing things ever”

According to the Daily Mail, Prince Harry said he had no hard feelings for his niece and nephew bumping his spot in line to the throne. He said in a statement, “The reason I am now fifth is because of my nephew and niece and I could never wish them away … They are the most amazing things ever.”

7. When he joked about Prince George stealing his spotlight

At the 2016 Invictus Games, Prince Harry did an interview with CBS This Morning co-host Norah O’Donnell. He joked that his nephew, Prince George, was starting to upstage him. He said, “I know, I know, I know… I wish he was here, I think he would love it,” in regards to the Invictus Games.

Be sure to SHARE this article if you can’t wait to see Prince Harry as a father!

Previous article: Studies Show That Eating An Earlier Dinner May Lower Risk Of Certain Cancers
Next Post: Snakes, Bears, And Sharks, Oh My? This Guy Was Bitten By All 3 And Survived!