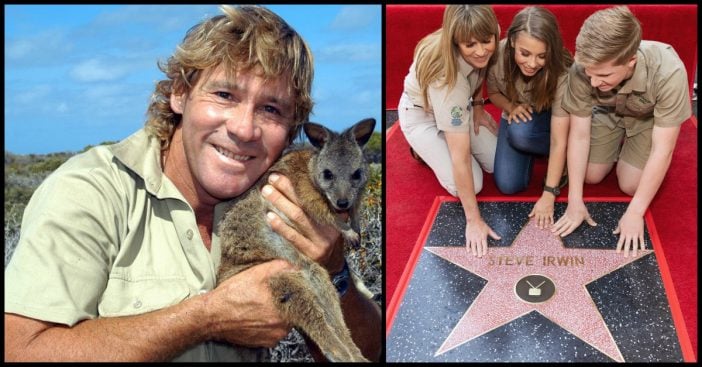 Steve Irwin, known as “The Crocodile Hunter,” passed away on September 4, 2006. Now, 11 years after his death, the television personality and zoologist has been honored with a star on the Hollywood Walk of Fame.

Steve Irwin’s parents were wildlife experts, and they opened the Queensland Reptile and Fauna Park when Steve was just a child. He grew up surrounded by crocodiles and other animals, and he wrestled his first croc when he was just nine.

Less than 24 hours until the unveiling of Steve’s Hollywood Walk of Fame Star! Join us at 6320 Hollywood Boulevard to honour the original Wildlife Warrior and his legacy. Celebrations start at 11:30am! You beauty!🐊 pic.twitter.com/UhJ8Pd1Zwc

Later, Steve started volunteering for Queensland’s East Coast Crocodile Management program. In 1991, he took over management of the park, and in 1998 he renamed it Australia Zoo.

Celebrating Steve at the Hollywood Walk of Fame Star Ceremony today 6320 Hollywood Blvd 11:30am. See you there! pic.twitter.com/aEBxP4m7CN

Thrilled to see Steve Irwin honored with a star on the Hollywood Walk of Fame! His contagious enthusiasm for animals will never be forgotten and lives on in his family @TerriIrwin @BindiIrwin @RobertIrwin pic.twitter.com/YxaKlL9FWk

Over the years, Steve and his family appeared on a number of other television programs, commercials, and movies.

I’ll remember today forever. Such an emotional moment and beautiful chapter in our lives❤️ pic.twitter.com/J8liezjFJl

Steve was a passionate environmentalist and conservationist, and encouraged others to care about the environment.

When Steve passed away at age 44, people all over the world were devastated by the tragedy. Since his death, he’s been honored in a number of ways, but none have been as noteworthy as his star on the Hollywood Walk of Fame.

Hello Lovelies,
Sending all my love and appreciation for your incredible support as Dad received his star on the Hollywood Walk of Fame. The kind words we have received are overwhelmingly thoughtful. Thank you. xx

Check out a video of Steve Irwin in action below, and make sure to share this article with your friends!