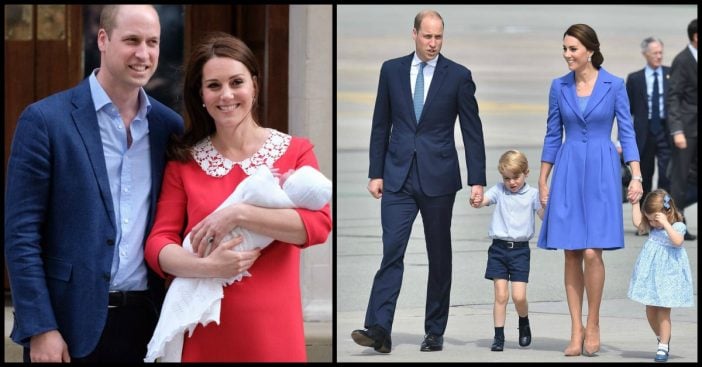 The royal family has officially released the name of the newborn prince: Louis Arthur Charles. He will be referred to as His Royal Highness Prince Louis of Cambridge.

Baby Louis was born on April 23, 2018. He is the third child of Prince William and Kate Middleton, the Duke and Duchess of Cambridge. Both Kate and the baby were doing exceptionally well after the delivery. In fact, they were so healthy that they left the hospital just seven hours after Louis’ birth!

Her Royal Highness The Duchess of Cambridge was safely delivered of a son at 1101hrs.

The Duke of Cambridge was present for the birth.

Her Royal Highness and her child are both doing well.

Although the first photos of the newborn prince were revealed just hours after he was born, the royal family kept his name secret for a little while.

The Duke and Duchess of Cambridge leave St Mary's Hospital with their new arrival, a baby boy.
Their Royal Highnesses have thanked all staff at the hospital for the care and treatment they have received, and thanked members of the public for their warm wishes. pic.twitter.com/6tSLv9JX8q

People all over the internet had guesses about what the baby’s name would be, ranging from Arthur to James. Here are some of the best Twitter guesses:

It was truly an exciting day to welcome the newest addition to the Cambridge family. Everyone was so happy. It was lovely. We’re still waiting on a name. I reckon Arthur is a shoo-in, with Philip, Michael, James in the mix for middle names. #royalbaby pic.twitter.com/otyHLb6eTY

Did you have a guess about what the baby’s name would be?

Ok so here it is folks. My name prediction for the #royalbaby is James Philip Arthur. Second choice Albert Philip Arthur. Let’s see what we get! (Hopefully today but could be another day or so…)

Most of the guesses were pretty spot-on, since they all sound pretty royal.

The new baby is fifth in line for the throne, behind Prince Charles, Prince William, Prince George, and Princess Charlotte. He takes the spot right above his uncle, Prince Harry.

People magazine explained that Louis name “is likely a tribute to Prince Philip, whose grandfather was Prince Louis Alexander of Battenberg. Louis is also part of Prince William’s full name of William Arthur Philip Louis and Prince George’s full name of George Alexander Louis. The name holds great meaning to William’s own father, Prince Charles, whose beloved great-uncle and mentor, Earl Louis Mountbatten, was assassinated by the IRA in 1979.”

This new little one might be the center of attention for the time being, but in a few weeks, he’ll be out of the spotlight when Prince Harry and Meghan Markle tie the knot.

The happy couple is set to wed on May 19, 2018 at Windsor Castle. For now, though, they’ll enjoy being uncle and future-aunt to this new baby.

The newborn prince is absolutely adorable, and we can’t wait to see more pictures of him as he starts to grow up!

William and Kate are thrilled to have a third baby, and there’s no doubt that Prince George and Princess Charlotte are excited to have a little brother.

If you love the royal family, don’t forget to share this article with your friends!