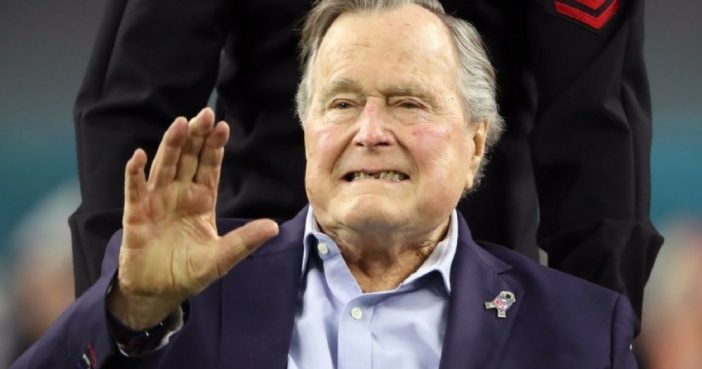 It does not matter what reason is given by doctors for President George H.W. Bush being hospitalized. The reason is an eternal love for his wife and the aching of his heart.

Notice how the people labeled "hateful" by the media have, over the last week, expressed the most love for both Barbara and George H.W. Bush despite fundamentally opposing their entire political legacy.

Ruminate on that for a minute.

There is something surreal, beautiful & bittersweet about
Former President George H.W. Bush wanting to join Barbara Bush…
A minute without her is a minute too long ❤️🙏❤️
That kind of love is remarkable no matter who you are!

Learning this about George H.W. Bush stuck with me:

He was a high school senior when Pearl Harbor was attacked. When he graduated six months later he enlisted in the Navy. It was his 18th birthday. He earned his wings before his 19th – becoming the Navy’s youngest pilot of WWII. https://t.co/znFkLfumN2

They say President George H.W. Bush is in the hospital because of a blood infection. I think it is heartbreak. 💔💔💔 https://t.co/W4va6BqWeI

Former President George H. W. Bush has been hospitalized with an infection, just days after his wife of 73 years was laid to rest.

I can't imagine the heartbreak he must be feeling. My thoughts and prayers are with former President Bush and the entire Bush family.

I know people want to think that George H.W. Bush is dying because of emotional distress, and it’s possible, but honestly it’s much more likely he picked up a virulent antibiotic resistant bacteria from the Hospital where he was visiting his wife. It’s an important problem.

George H.W. Bush has been hospitalized and is in intensive care, @jamiegangel says just now on CNN.

Breaking News: Former President George H.W Bush Has Been Admitted into The Hospital into Intensive Care.
He Is Suffering From an Infection That Has Lead To Sepsis.
Prayers For Our 41st President Who Is Also Grieving His Wife, Barbara Bush's Death.#PresidentHWBush 🙏 pic.twitter.com/hi4xcbOEjk