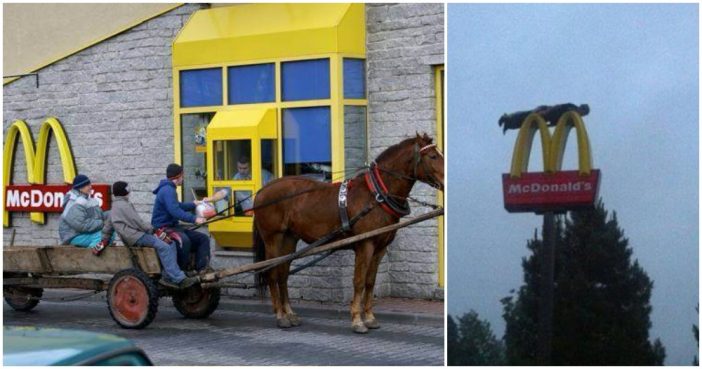 McDonald’s has been in our lives for a whopping 77 years now, after being founded in 1940. Two brothers, Richard and Maurice McDonald, first set up their barbecue restaurant over 7 decades ago, without realizing how truly massive it would become. It wasn’t until 1953, however, that the first franchised restaurant with the famous Golden Arches was opened up.

Over the last 77 years, McDonald’s has grown to be one of the most recognizable brands in the whole world. We all have fond memories of McDonald’s; from the epic birthday parties, you could have through to late night stop-offs after parties. You’re bound to see some weird and wonderful things every now and then. A bit like WalMart, which definitely seems to attract some colorful characters. These photos go to prove that there’s nowhere quite like the Golden Arches of Maccy D’s!

Look, if you’re going to advertise free Wi-Fi as a selling point to your fast food establishment, don’t be surprised if people start bringing in all of their devices. While you may have expected most people to bring in their laptops and tablets, one woman took it a step further when she brought in her entire personal computer. Like… How heavy was that to carry around? Someone needs to hook this lady up with some modern technology.

Do you sell treats?

“Excuse me, ma’am; I’d like one Big Mac meal for my owner and some treats for myself. Thanks, I’ll drive through.” Imagine going to work one morning, expecting to serve hundreds of hungry (human) customers and then seeing this through the window. Okay, so the beagle is totally adorable, and we’d give it anything it ordered, but it’s still totally insane. We might try this with our Pug and see if we get the same reaction.

Okay, so this is totally creepy (and also a little bit hilarious). This disgruntled customer obviously wasn’t very happy with the lack of crayons when they attended this McDonald’s – and so they decided to make their feelings clear with a rather disturbing message written in… tomato sauce. We hope. We can even see the offending chip that was turned into a writing utensil for this particular letter of complaint. It may be kinda creepy, but you wanna bet that this McDonald’s definitely got in some crayons after receiving it.

I can see you

You know the phrase, “I’ve got eyes in the back of my head”? Well, usually it’s said by a mom to her kids to stop them from misbehaving, but this guy means it quite literally. This creepy tattooed guy is the kind of person you’d see in those WalMart articles about how kooky their shoppers are… Wait, is that a WalMart bag in his hand? Well, there we go then. We wouldn’t want to be standing behind him in the queue to be honest. We’ll go to KFC!

Who doesn’t love an ice-cream sandwich? It’s definitely in our top 20 food items (we like food, okay?!) but we’ve never seen McDonald’s selling them. It looks like this customer made a seriously smart move when they asked for the delicious McDonald’s ice-cream in a burger bun – thus making their very own ice cream sandwich. We are definitely going to give this a try the next time we fancy a sweet treat from McDonald’s.

Trying to make it big in the world of music is hard work. You can struggle for months just to get your first gig, and you’ll likely take anything that comes your way right at the beginning. This guy certainly isn’t fussy about what kind of gigs he takes. Who knew that McDonald’s did raves?! And how do we get invites to a McDonald’s party? We can imagine there’s some epic food available at this kind of gig.

Maybe the DJ was hired for this potato party?! They’re a real thing in Asia… Seriously. The aim is to buy a whole ton of fries (about $250 worth in this case), and then no one is allowed to leave until every single fry has been consumed. What disturbs us is the entire lack of sauce in this photo. We’d get some serious dry mouth eating that many fries without a whole load of condiment to dip into.

We miss the whole planking craze… Whatever happened to that? In case you don’t know what planking is (where have you been?!), it’s basically where you lie on stuff like you’re a wooden plank. And this guy has taken it to a whole ‘nother level with his planking on the McDonald’s famous golden arches. We want to know how he got up there and how he’s not absolutely terrified of falling off. He must have some massive chicken nuggets!