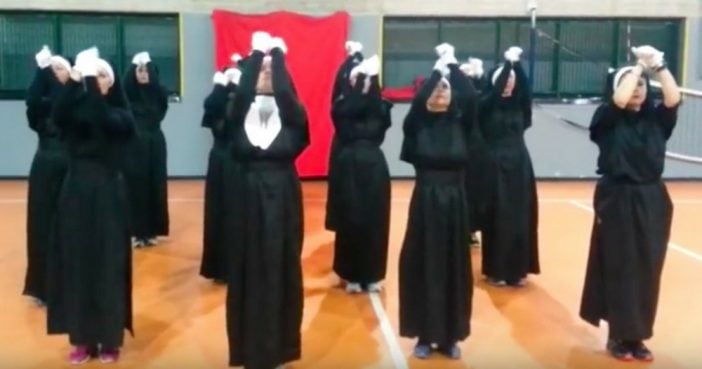 Images are associated with words. Hence, when one thinks of the word “nun,” an image of a demure-looking, religious woman, enclosed in a place of worship, enters the mind. But a bunch of nuns decided to break the stereotype. Because what is it, if not a stereotype? They aimed at showing the world that one’s religious fervor does not get compromised if one indulges in some fun.

They invited people to a local entertainment center. The nuns had made a song out of hymns and had decided to do their Zumba routine on it. It all started with some easy-going movements to the tune. The nuns were all synchronized in their smooth movements to the song.

But then the song picked up the beat and the nuns’s movements became so energetic! The audience was thrilled and the entire place felt invigorated. It started slowing down after that, and the nuns relaxed their motions likewise. The audience not only enjoyed but also appreciated the clear message the nuns were sending out through the dance performance.

The nuns showed that one’s religious beliefs may not get in the way of one’s passion.

Previous article: 10 Reasons Why You Should Save Bacon Grease
Next Post: Just Released: The Trailer For Elvis’ Granddaughter’s New Movie