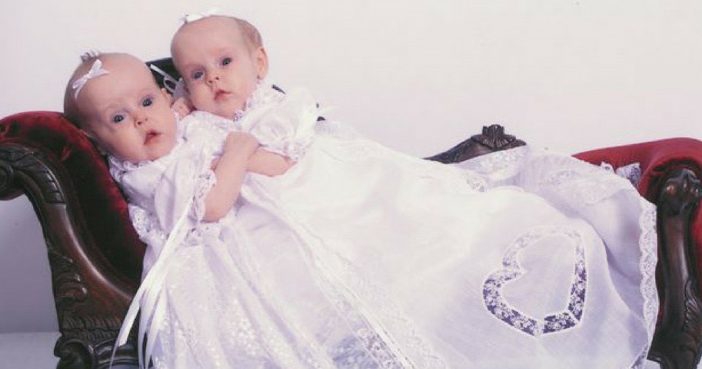 Kendra and Maliyah Herrin made headlines in February of 2002 when they were born as conjoined twins, sharing a large intestine, bladder, liver, and single kidney. Their parents, Erin and Jake, were faced with any parent’s worst nightmare, they had to decide if they were going to separate the girls or keep them conjoined. Both of these options were going to put the girls’ lives at risk and it was not something that any doctors would take lightly either.

In August 2006 they were separated being the first set of conjoined twins to be separated to share a kidney. Kendra retained their shared kidney following the separation surgery, while Maliyah Herrin underwent dialysis until she was transplanted with a kidney donated by her mother in April 2007.

Conjoined Twins Prior To Separation

Prior to the separation surgery, medical ethicists in the United States and in Europe discussed whether it was ethical to separate the twins because of the additional risk to Maliyah. Their family and doctors believed separation surgery would give both girls their best chance to live a normal life.

“One doctor told us he thought everything from the twins’ chest, down was mush, and they didn’t have the organs they needed to survive on their own outside of my womb,” Erin said. “Another doctor told us to simply abort the twins because it was all too complicated. But I’d seen our daughters’ faces close up, at an MRI scan, and fallen in love with them. I was determined to do whatever it took to bring them into the world safely, even if it meant risking my own life.”

Erin and Jake made the decision to separate their daughters when they were 4 years old. They felt that this option would give the girls the best chance to live a normal life. The surgery posed major health risks and it became a national story.