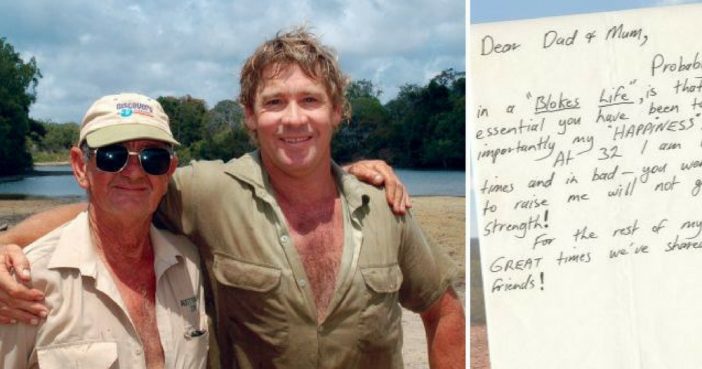 ‘My love for you is my strength’: Steve Irwin’s touching letter to his parents before he was killed by a stingray. When Steve Irwin died after being attacked by a stingray in 2006 it sent shockwaves around the world. And now, as his family and fans prepare to mark the 10th anniversary of his death, a heartbreaking note penned by the Crocodile Hunter has been uncovered.

Steve Irwin’s touching letter, written to the conservationist’s parents 12 years before his death, reveals a man who was ‘finally starting to figure it out’ at the age of 32.

Heartbreaking: Steve Irwin’s Touching letter to his parents have been uncovered as his family and fans prepare to mark the 10th anniversary of his death

‘Probably one of the most unfortunate things in a ‘Bloke’s Life’ is that it takes over 30 years to realize how essential you have been to build my character, my ethics and, most importantly, my HAPPINESS,’ he wrote, in the letter published on news.com.au.

‘At 32, I am finally starting to figure it out. In good times and in bad, you were there. Your strength and endurance to raise me will not go unrewarded. My love for you is my strength!

‘For the rest of my life I will reflect on the unbelievably GREAT times we’ve shared and will continue to share. You’re my best friends!’

Steve’s father Bob only discovered Irwin’s touching letter earlier this year when he was researching his memoir, The Last Crocodile Hunter: A Father and Son Legacy.

He told the publication that the unopened letter addressed to himself and his wife Lyn, fell out of a book.

A message on the envelope read: ‘Please be happy to know that your strength and wisdom have been passed on.’

Just 12 years after writing this letter, Steve passed away in the waters off Port Douglas in Far North Queensland at the age of 44.

From beyond the grave: The touching letter was written to the conservationist’s parents 12 years before his death

Legacy: In the years since, Steve’s wife Terri and children have taken up where Irwin left off, as powerful voices for the protection of Australian wildlife

Page Page 1 of 2
Previous article: Conjoined Twins Became Famous In 2002 And 11 Years Later They Are Back On TV Living Healthy, Separate Lives
Next Post: Bride Gets Married In $69 Wedding Gown Then She Puts The Dress Back On 60 Years Later