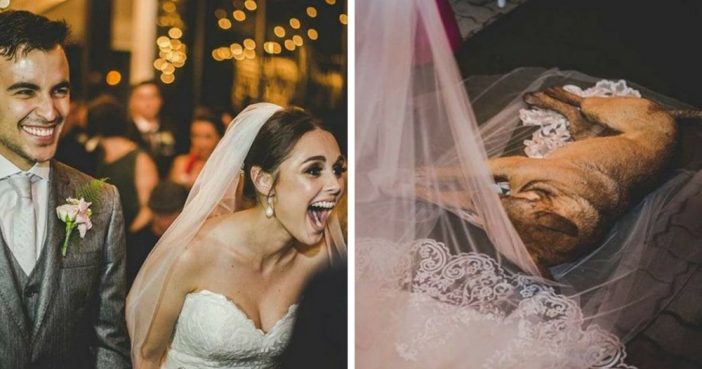 The couple had the sweetest reaction to the unexpected guest.

Wedding Crashers can often be unwelcome and obnoxious freeloaders. But that was not the case when an unexpected guest showed up at the recent nuptials of Marília Pieroni and Matheus Gomes Martins.

When Marília married Matheus on Sept. 30 in Laranjal Paulista, Brazil, rainy weather forced the couple to move the ceremony into a tent.

As guests took their seats, a stray dog with muddy paws wandered into the area but was escorted outside. He then made his way back in again.

“As the ceremony started, to everyone’s surprise, it was the dog who came in when the bridal chorus began to play,” Marília told The Dodo.

For the second time, the persistent pup was moved outside, and the ceremony carried on. But while the couple was exchanging their vows, the dog entered yet again and plopped down on the bride’s veil for a nap ― a moment captured in the photo below.

“I was really surprised and thought the little guy was really cute,” Marília told HuffPost in Portuguese.

The newlyweds embraced their bonus guest, allowing him to stay for the reception. According to the bride, the dog enjoyed some food from the buffet but disappeared again shortly after.

Page Page 1 of 2
Previous article: South Africa’s Winnie Madikizela-Mandela Dies At 81
Next Post: 16 Celebrities Who Look Decades Younger Than They Actually Are