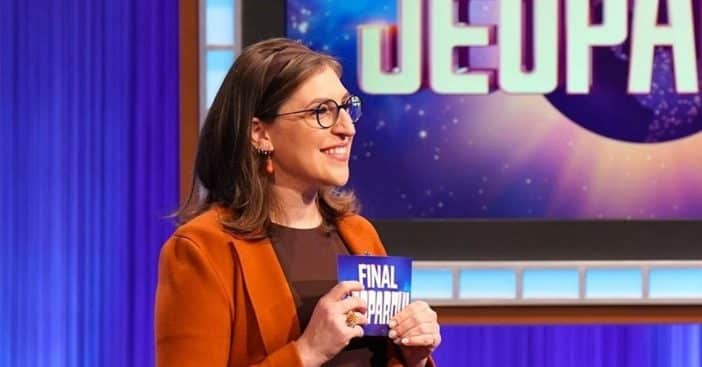 Mayim Bialik is making the news again, but in a negative way resulting from a recent error she made on the show. During an episode of Jeopardy! earlier this week, Bialik made a mistake saying that a player on the show didn’t get points for a question in which the contestant actually did. To rectify this error, it took the intervention of the show producers to douse the tension.

Mayim Bialik took over the show’s hosting when former host Ken Jennings signed off on the 28th of January this year. This is not the first time she would make an error on the show. It could be recollected that on a Monday episode of the show in June, there was a clue that asked: “You can lead a horse to  water, but you can’t do this.” Meghan Wachpress, the leading contestant on the show, answered, “What is drink….what is make….” But before she could correct herself, Mayim interrupted her and ruled her answer wrong. This act sparked many negative reactions against the host and the show itself.

The Error Made By Mayim

While on the show asking questions from contestants, a clue for a question asked, “From a Latin word for ‘to clock,’ it’s the type of care given to provide comfort without curing.” Andie Huskie, a contestant on the show, put forward his answer saying, “What is palliative care?” with a different pronunciation which he quickly corrected before his time elapsed. But Mayim would not have it as she declared that the answer was wrong. This made the show producers quickly come in while the Daily Double was going on, compelling her to announce their verdict as regards Huskie’s answer.

Halting the game while another contestant was answering the question thrown, she said, “We have a score change and, Andie, it affects you. The judges have reviewed your response, and you corrected your response of ‘palliative care’ before I began to rule you incorrect. We will be adding $4,000 to your score. That puts you in the lead.”

Lovers of the show have since come out on their various social media outlets to express their feelings as regards the error and the timely intervention of the judges. A fan of the show via Twitter stated, “Glad the judges overruled Mayim’s hasty “NO.” #Jeopardy.” Another viewer also commented, “That was ridiculous. Clearly started to correct himself before she ruled.”

“Why does that keep happening. It messes up the whole game like the contestants get robbed from picking the next category and confuses the viewers at home. I thought I was wrong screaming at the tv and those around me lol,” another viewer said with astonishment.

Another fan of the show displaying confusion said,” I was scratching my head on that one. He totally answered in time.”

Mayim’s hasty judgment making her dismiss answers as wrong has made her fall out of favor with fans of the show, especially the Megan Wachpress situation in the past month in which the producers had to overrule Bialik and award the score to the contestant.

Click for next Article
Previous article: How John Wayne Pranked James Caan During Filming Of ‘El Dorado’
Next Post: Willie Nelson’s Granddaughter, Waylon Jennings’ Grandson Perform Acoustic Duet Of “I Can Get Off On You”