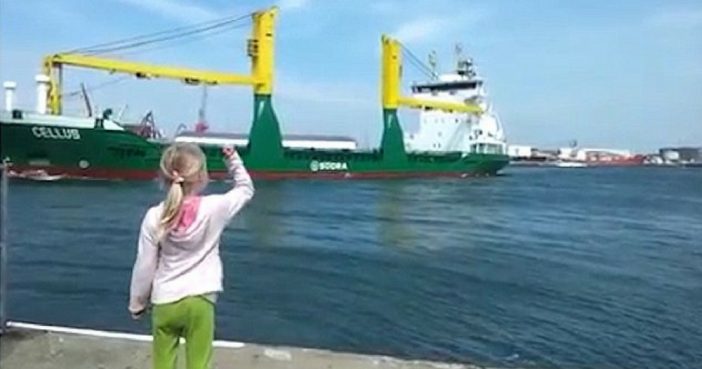 We’ve all had moments in life where we’ve insisted we know what’s best for us, then immediately learned that we were totally wrong. And this little girl is no exception.

Vilma from Sweden probably didn’t use any magical or scientific means to get what she wanted, but she did. And from what it looks like in this video, no one warned her about what can happen when you wish for things… loud things!

She really, really wanted a huge ship to toot its horn as a bit of a ‘hello’ as she stood waving at it from the harbor.

But she soon learned that she shouldn’t have begged them to do it.

In the hilarious clip (see below), the cute tot repeatedly motions with her arm, signaling the crew to ‘beep’ at her. After a good 20 seconds or so of doing it, she seems like she is just about to give up but the team on the ship gives the honk she’s been begging for. This is when she immediately regrets her decision.

It’s so loud, she gets the fright of her life and runs away with a horrified look on her face as adults around her chuckle.

Poor girl… she’ll probably be afraid of boats for life the rest of her life, after this.

Previous article: Over 30 Years Ago, Baby Jessica Was Rescued From A Deep Well, As The World Held Their Breath
Next Post: 19 Iconic Photographs From The 60s All Baby Boomers Will Instantly Recognize