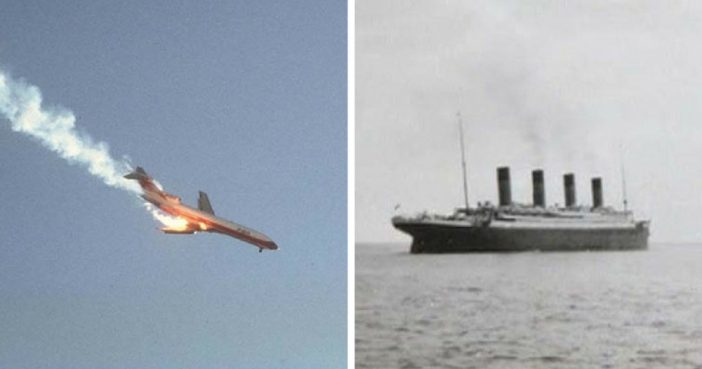 With all its commotion, life can be hard to process “in the moment,” and this is especially true of dangerous, harrowing, and tragic events. Recollecting or reconstructing these moments after the fact is therefore almost always a challenge. Thankfully, though, as photography has grown in ease and ubiquity, more and more of these sorts of events have been captured and documented on film.

While this is great for our history books, it can just as often be startling to look at a photo and realize disaster is about to strike. When you see these images in particular—taken before, during, and after significant tragic incidents—your hair just might stand on end.

This is the last photograph ever taken of the Titanic as it set sail for New York in 1912. At the time of its launch, it was the largest passenger ship ever built, but unfortunately, that didn’t mean it was necessarily the safest. Whoever took this photo, was not aware that this is the last they would ever see the revolutionary ship.

James Dean is seen here filling up with gas for his Porsche 550 Spyder. This was taken just before he crashed it and was killed. Legend has it that the car is cursed, as it was involved in several more accidental deaths before disappearing in the ’60s.

This photograph was recovered from Japan Airlines Flight 123 after it crashed, killing everyone on board. Notice in this picture that the emergency oxygen masks had already dropped, meaning this was taken right before the plane actually crashed. Wow, that made us shudder.

A man took this photo while on a hike in New Jersey, moments before the bear attacked and killed him. A photo is never worth your life. He put himself in a dangerous situation.

William “Dave” Sanders, a coach at Columbine High School, was caught on the school security cameras guiding more than 100 students out of the cafeteria just before being killed in the shooting.

This picture captures the start of an eruption of Mt. Etna in Sicily, Italy back in 2013. The volcano is one of the world’s most active, with various volcanic events occurring multiple times per year. This is an incredible image showing the calm before the storm, literally.

The band Great White plays a show at Rhode Island’s Station Nightclub, just before their pyrotechnics caused a fire that killed more than 100 people. In this eerie photo just before the incident see you can see the destructive fireworks on display, but nobody is aware yet…

Page Page 1 of 5
Previous article: 20 Of The Best And Worst Items To Buy At Dollar Tree
Next Post: Princess Charlotte Started Nursery School And The Pictures Are Seriously Adorable