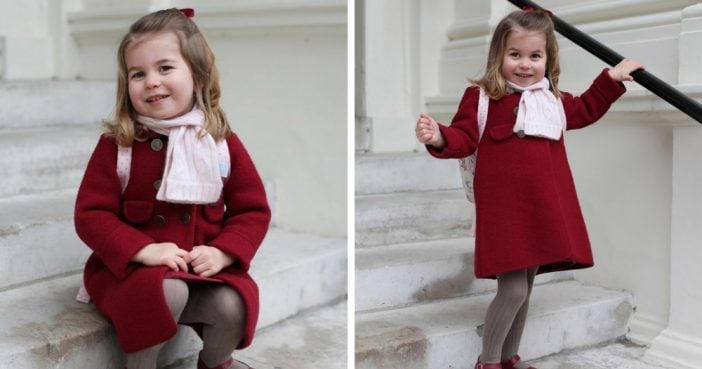 The two-year-old looked confident and raring to go as she left Kensington Palace before her first day at nearby Willcocks Nursery School.

How fast they grow.

Prince William and Duchess Kate released a pair of new photos of Princess Charlotte, 2, on her way to her first day at Willcocks Nursery School in London.

Princess Charlotte is all smiles before her first day of preschool on Jan. 18, 2018.

Her brother, 4, had his first day of school in September at Thomas’s Battersea, the well-regarded private day school across the River Thames a few miles from his family’s home in Kensington Palace in London.

Princess Charlotte smiles as she prepares for her first day of the nursery at the Willcocks Nursery School, on Jan. 8, 2018.

The two are expecting a sibling, due in April.

1. Everyone wants to see Princess Charlotte, especially Prince George, at her christening. But it may be months more before we see the youngest royal again, so these remarkably skillful ‘mum snaps’ by Duchess Kate will have to do for now.

2. Charlotte was mostly awake and happy as she was pushed in her pram from Sandringham House to the church for her christening, as well-wishers lined the path and photographers snapped away.

3. Some photographers got close enough to snap Charlotte in her pram as she left the Church of St Mary Magdalene on the royal Sandringham estate.

4. The next sighting of Charlotte was at her christening at the Sandringham church, on July 5, wearing the royal christening gown as George and scores of royal babies have done since the mid-19th century. Charlotte was mostly hidden in her fancy baby carriage but Kate took her out to carry her to the church for the ceremony.

5. George looks delighted to show off his little sister in these pictures.

6. The next time we got to see Charlotte was especially touching, in a double portrait with Prince George snapped by Kate at Anmer Hall in mid-May a few weeks after her birth, and released on June 6, June 2015.

7. Prince William is an old hand now at toting babies, having learned the ropes with Prince George two years before. Charlotte’s name was announced two days after her birth, on May 4. She’s the fourth-in-line to the British throne.

8. The newborn baby princess was snoozing in a car seat when she was carried out of the hospital by her father on the day of her birth.

9. Pictures of Charlotte are few and far between, so even her newborn pictures are prized, even though newborns mostly look alike, especially if they’re covered in blankets and baby caps. These, by the way, were hand-made in Spain and were a gift from the Cambridge nanny, Maria Teresa Turrion Borrallo. Charlotte was born on May 2, 2015, at St Mary’s Hospital in London, and went home with her parents only hours later.