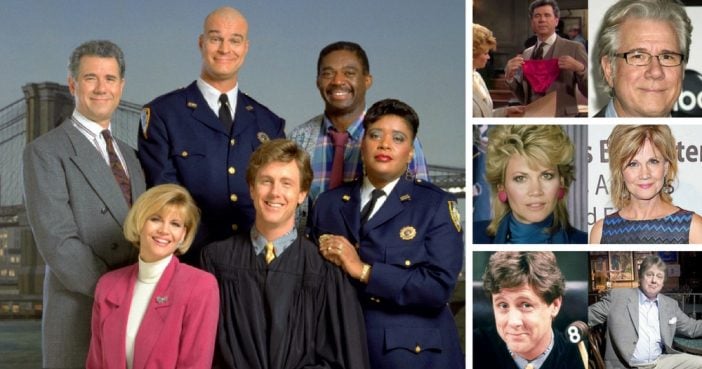 In 1984, one of the unlikeliest of places — a downtown municipal night court for petty crimes — became the setting for a TV show, and it turned into a hit. The irreverent sitcom Night Court ran for nine seasons on NBC. The show got its start January 4th, 1984 as a mid-season replacement directly following Cheers. The Night Court said their final goodnight with the final episode which aired May 31, 1992. Enjoy our nostalgic look at the cast members of Night Court.

After appearances on Saturday Night Live and Cheers, actor/magician Harry Anderson got his big break portraying Judge Harold “Harry” T. Stone, which earned him three Emmy nominations in the category of Outstanding Lead Actor in a Comedy Series. After Night Court ended, he landed the title role in the CBS sitcom Dave’s World which lasted four seasons. On April 16th of 2018, Harry Anderson sadly passed away. RIP

Born November 25th of 1947 in New Orleans, John Larroquette has become etched in history with his role of prosecutor Daniel R. “Dan” Fielding. His work on Night Court earned him four straight Emmy wins (1985-1988) in the category of Outstanding Supporting Actor in a Comedy Series. In 1989, he asked for his work to not be submitted for another Emmy nomination. After his role on Night Court, the Louisiana native would create The John Larroquette Show and make critically acclaimed appearances on The Practice and Boston Legal. Recently, he had a recurring role on the TNT series The Librarians.

Born in California, November 4th of 1950 Markie Post made a splash starring in Night Court. From 1985 to 1992, Markie Post portrayed the role of public defender Christine Sullivan. After the show ended, she landed a co-starring role on the CBS sitcom Hearts Afire, which lasted from 1992 to 1995. Recently, she lent her voice to the Transformers Prime cartoon, and she held recurring roles on Rack and Ruin and Chicago P.D.

Night Court cast member, Richard Moll’s portrayal of Nostradamus “Bull” Shannon was beloved by fans around the world. Since leaving the show, the California native became the voice behind comic book characters on Batman: The Animated Series (Two-Face), Spider-Man (Scorpion), and Justice League (Java). Recently, he has made appearances on Anger Management, Cold Case, and Kirby Buckets. He is currently 76 years old.

Charles Robinson’s biggest role in his career was playing Vietnam War veteran Macintosh “Mac” Robinson on the hit show. After Night Court ended, he landed the role of Abe Johnson on the CBS sitcom Love & War. Lately, the Texan has made appearances on Grey’s Anatomy, Mom, and Key and Peele.