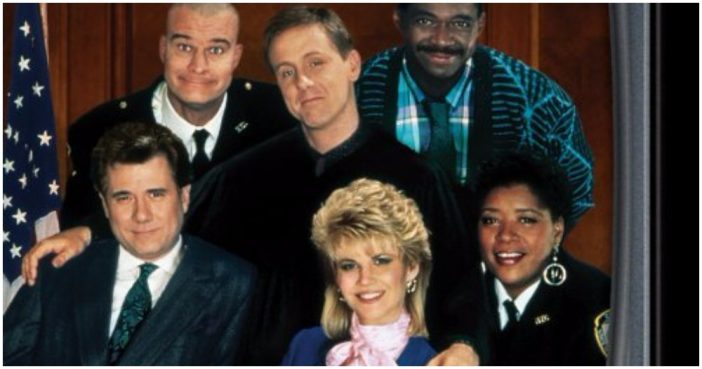 Who knew that the American justice system could be so bawdy? You can thank Night Court for that little revelation. Through nine prime time seasons, this hit sitcom turned a New York City courtroom into a den of naughty humor. It wasn’t that Night Court was just about sex; it’s just that the libidinous parts were the ones the kids stayed up to watch.

Presiding over these courtly shenanigans was Judge Harry T. Stone, a mischievous scamp with a yen for magic tricks. Harry frequently ruffled a few judicial feathers (he decided a case in the first episode by flipping a coin), but his Solomon-like ability to always do the right thing kept him in the robes and on the bench.

A parade of co-stars came and went over the first few seasons-clerk Lana Wagner, public defender Liz Williams, public defender Billie Young, and more-and then there was the case of the tragic bailiff. Selma Diamond played tough old bailiff Selma Hacker in the show’s first season, but she passed away in 1985. In came bailiff Florence Kleiner, but actress Florence Halop died after the show’s second season. Roz Russell became the court’s new bailiff in the fall of 1986, staying with the court for the rest of the show’s run.

Despite the turnover, a few characters became permanent fixtures of Judge Stone’s courtroom. Bailiff Bull Shannon was the show’s oversized, loveable lug, while District Attorney Dan Fielding had nothing loveable about him (and the only thing oversized was his ego).

Dan was the official courtroom sleazeball, trying to woo and bed every nice-looking female who entered the halls of justice. And slimily charming sort that he was, he often succeeded.

As the series got settled in, the rest of the regulars fell into place. Mac Robinson became the new court clerk in the fall of 1984, usually playing the straight man to the rest of Night Court’s wacky denizens. A Vietnam vet, Mac married Vietnamese woman Quon Le Duck to help her stay in the U.S., and the new Mrs. Robinson became another semi-regular.