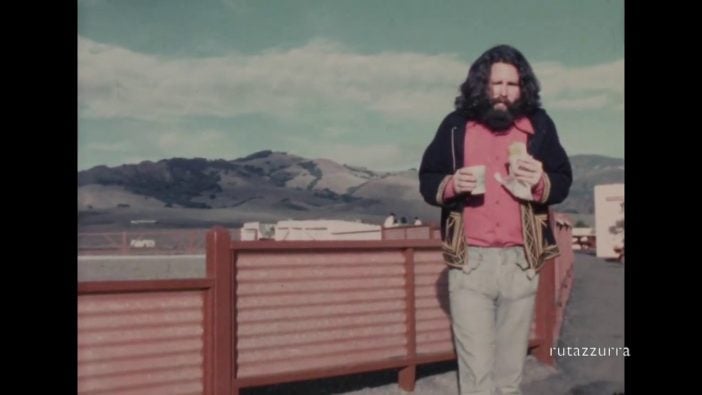 Charlotte Steward is most famous for her role as the schoolmarm ‘Miss Beadle’ on Little House on the Prairie from 1974-1978 and her work with director David Lynch. But she also had relations a/k/a drinking buddy and friend with benefits with ‘Doors’ frontman, Jim Morrison.

Courtesy of Jim’s girlfriend Charlotte Stewart, who shot this silent Super 8 footage on her road trip with the Doors singer in Nov. 1970 speaks about the late, great singer. (Video Below)

“We became drinking buddies,” Stewart says. “We used to go down the street, close to where my store was, and sit at a bar and talk… On more than one occasion, I would help him home, either to his or mine.” She continues, “I wasn’t looking for romance, I wasn’t looking for a partner. I was just kind of a buddy that he could talk to. Well, I call it a ‘buddy with benefits,’ if you know what I mean.”

In the midst of their friendship, Morrison found himself facing serious charges of indecent exposure.

So, Morrison invited Stewart to accompany him on a short road trip.

“We hopped in his car and we drove up the coast of California, stopping in little bars and pool halls all the way,” Stewart says. “We went up to Cambria, which is where the Hearst Castle is, took the bus up to the Hearst Castle and nobody recognized him at all.”

Stewart took video of their four-day trip together but points out that, for the most part, she and Morrison quietly took it all in.

“There wasn’t a lot of talking. It was mainly driving, looking out the window at the Pacific Ocean,” she says. “We had a very nice time.”

Unfortunately, they wouldn’t be spending any more time together.

“He dropped me off, and I never saw him again,” Stewart says. “I think I was one of the last people to spend some personal time [with him]. He left soon afterward for Paris and, as you know, he died there.”