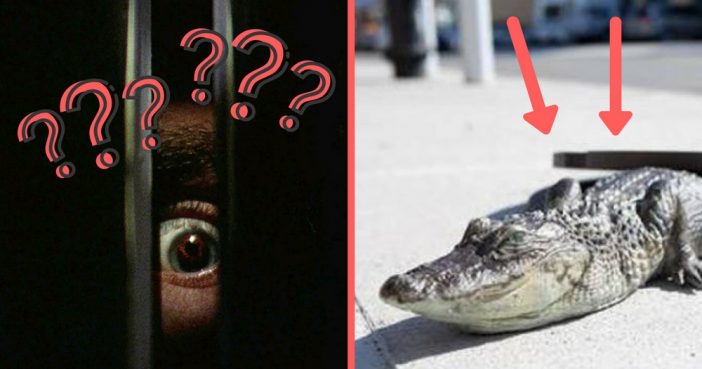 The legend: A green-glowing, faceless supernatural entity wanders the backcountry roads in western Pennsylvania. Locals came to refer to this spectral figure as Charlie No-Face or The Green Man, and countless sightings were reported over the years.

The truth: The Green Man is as real as they come, and his origins are tragic. The legend is based on Raymond Robinson, a Pennsylvania resident who was severely disfigured in an electrical accident as a child. He lost his eyes, nose, and right arm, but defied doctors’ expectations by surviving the ordeal.

Raymond’s physical appearance was enough to cause mass hysteria, so he would only venture outside in the evenings and spent his nights roaming a quiet stretch of State Route 351. Many sought him out, hoping to catch a glimpse of a local legend.

Some of those he crossed paths with are said to have brought him beer and cigarettes, posing for photographs with him and engaging in friendly conversations, while others taunted him. He died in a retirement home in 1985 at the age of 74.

7. The Corpse Mistaken For A Halloween Decoration

The legend: What everyone thought was an impressively realistic Halloween decoration depicting a hanged woman was, in fact, a genuine suicide.

The truth: Rather tragically, this did happen. In 2005, in the town of Frederica, Delaware, a woman hung herself from a tree on a busy roadside during the Halloween season. Countless motorists passed by, but her suicide went unreported for hours.

It turns out that many of the passersby thought the suspended corpse was a Halloween decoration (albeit the least tasteful one ever made) and simply left it to swing.

The Legend: The man of the house attempts to surprise his family by dressing up as Santa Claus and climbing down the chimney on Christmas Day. Instead of presents and season’s greetings, he delivers only abject horror because he gets stuck along the way and is later found dead in that sooty shaft.

The truth: Mercifully, no would-be Santa has ever been found dead in a chimney shaft, but several have ended up trapped attempting to pull off this holiday stunt.

Chimney-related fatalities have occurred in households over the years, though the victims have been burglars attempting to enter the property from the roof. A thief in California died of smoke inhalation in December 2015 when this fate befell him.

The Legend: A single man notices things mysteriously going missing from his home and often hears strange sounds coming from the upstairs rooms. To check whether he’s completely losing it, the man sets up cameras around the house, and to his horror, they catch footage of a shadowy figure going back and forth from the attic.

The ‘uninvited housemate’ myth has been told for generations and has inspired movies including the slasher classic Black Christmas and its 2006 remake.

The truth: As far-fetched as it might sound, this happened to a man in Tokyo in 2008. The unnamed householder became suspicious when food kept vanishing from his abode. Believing he was the victim of repeat burglaries, the unnamed householder installed a network of security cameras, which revealed the culprit was a woman.

After turning the footage over to the police, officers conducted an investigation which included a search of his property and they found the thief hiding in a cupboard. Inside the cupboard, she had made a sort of den for herself and is believed to have been living there, right under his nose, for as long as a year.

10. The Corpse In The Water Tank

The legend: A family moves into a new apartment and soon discovers that the tap water there is discolored and tastes funny. A search of the water tank later reveals the culprit: the dead body of the flat’s previous resident.

The truth: Although this urban legend has inspired fiction, with TV show How To Get Away With Murder and the horror movie Dark Water adapting it, it eerily came true in 2013 when the body of Elisa Lam was discovered in a water tank of an LA hotel.

Lam’s death remains an unsolved mystery and strange footage of her inside an elevator shortly before her death only makes the case more perplexing. The video shows her exiting and re-entering the lift, talking and gesturing in the hallway outside, and sometimes seeming to hide within the elevator.

Since the footage was circulated online, many theories have attempted to explain her bizarre behavior. Some claim she was having a psychotic episode (Lam suffered from bipolar disorder) and her death was the result of a suicide, while others believe she was trying to hide from somebody who was pursuing and would later murder her.

Page 2 of 2Page
Previous article: 25 Heartwarming Vintage Photos Show A Happier Side Of History
Next Post: 15+ Things You Should Know About Waffle House Before Taking Another Bite