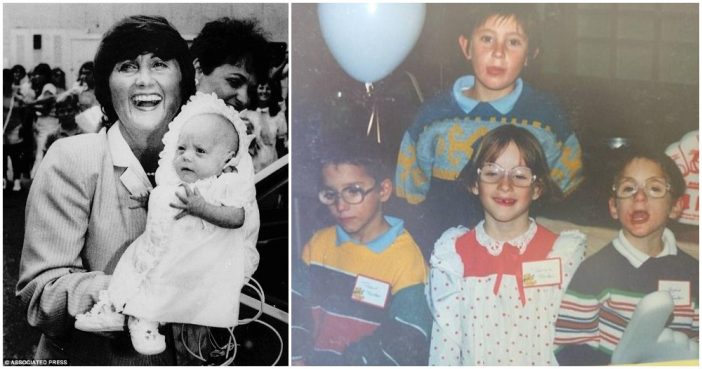 A California woman who gained notoriety in the 1980s for giving birth to the nation’s first septuplets has died, her eldest son Joseph Frustaci said.

Patricia Frustaci made headlines in May 1985 when she welcomed seven children – four boys and three girls – at a San Diego hospital. The babies’ arrival was said to be the largest multiple births in the United States at that time.

The former English teacher died on February 10, Joseph said, at a San Diego hospital from complications with pulmonary fibrosis. She was 63.

Joseph, who was four when his seven brothers and sisters were born, told the Mercury News that he thinks the fame his mother received from giving birth to the septuplets took a toll on her.

Patricia Frustaci, the California woman who gave birth to the nation’s first septuplets, died at the age of 63 from complications with pulmonary fibrosis. Pictured above from left to right is the surviving septuplets Stephen, Patti, and Richard with their father mother Patricia (center) and their father Samuel (back right) and older brother Joseph (back center)

Patricia gave birth to the septuplets – four boys and three girls – in May 1985 after undergoing fertility treatments.

One of the septuplets was stillborn and three of the other babies died within weeks of being born. Pictured above are the three surviving septuplets with their older brother, Joseph.

The surviving children are said to be doing well. Patricia is married with two children; Stephen lives in Las Vegas with their father and Richard lives independently.

Page Page 1 of 2
Previous article: This Looks Like A Normal Bungalow But The Interior Hasn’t Been Touched Since The 70s
Next Post: 18 Hilarious And Brilliant Women Who Are Doing Life Right