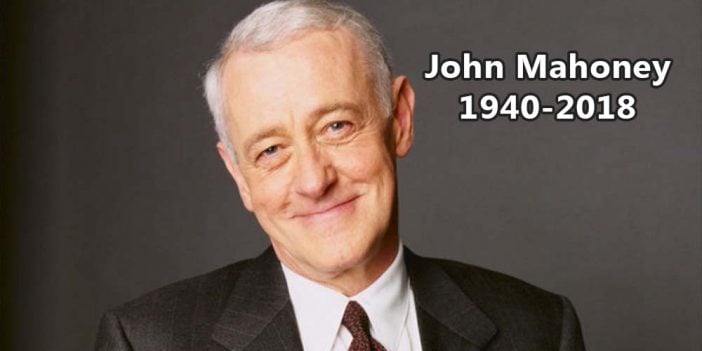 RIP John Mahoney, an acting legend in Chicago, who appeared onstage at Steppenwolf many times and in such films as BARTON FINK, SAY ANYTHING… and THE IRON GIANT, among many others, and played Martin Crane on FRASIER. pic.twitter.com/uLU9Gp3lI3

I never loved John Mahoney more than when he was annoying his TV sons with dated Austin Powers references pic.twitter.com/VGAjY8xchh

Oh no!! Frasier is a comic masterpiece and John Mahoney was magnificent in that role. What a loss https://t.co/7uYjP3xnPt

John Mahoney. The perfect comic actor because you saw no acting. What a legacy: the argument with Frasier when they act Jewish, saying “love ya” to his mate but not his kids, the Daphne impression etc etc. Genius. RIP.

Sorry to hear of the passing of #JohnMahoney Such a talented actor and wonderful man. RIP, my friend. pic.twitter.com/6EJwcdwJco

John Mahoney, who was best known as Kelsey Grammer and David Hyde Pierce's irascible but hilarious dad Martin on Frasier, has died. He was 77. He also appeared in such films as Tin Men, Moonstruck and Eight Men Out. pic.twitter.com/yPjS3HZMyp

John Mahoney was such a wonderful corner of the perfect square that was Frasier, Niles, Marty and Daphne. RIP.

#RIP John Mahoney you grounded a great show and made it great.

Oh man, gutted to hear about John Mahoney. He played two of my favorite uniquely complicated dads ever. Enjoyed him in Barton Fink too. RIP, sir. pic.twitter.com/J3osp5TcTL

bit aside, this is pretty tough news about someone who became one of my favorite actors over the years solely from his work on frasier.

A wonderful actor has died: John Mahoney, 77, longtime Chicago stage star, sterling work in every medium. "Frasier" was just the icing on the cake. So good in "Moonstruck," among dozens of others. pic.twitter.com/TpLAh7sBXY

Sad to lose John Mahoney, who was great as Frasier's dad but even better as Diane Court's dad. He will be missed.

Oh, John Mahoney. You were the best. RIP, you sweet, talented man.

RIP John Mahoney, who played Kid Gleason in one of my favorite films ever, John Sayles’ Eight Men Out pic.twitter.com/Cc1tCCeSlp

John Mahoney was great in Frasier – such sad news to see he passed. pic.twitter.com/Jb2Z8B5c7S

Sad to hear that John Mahoney has passed away.
Most of my generation will remember him fondly as FRAISER's dad, Martin Crane.
To me, he'll always be the General from THE IRON GIANT…https://t.co/SzjqVTGD6o
…and Amy & Smitty's Chief at the Argus in THE HUDSUCKER PROXY. pic.twitter.com/TC5hYGl654

Rest in Peace to one of my favorites. John Mahoney, you are a legend. Raising a glass in your honor. pic.twitter.com/nP1LuvtwzG

Please retweet this on the night John Mahoney passes. A fantastic, astute, correct piece about his character and the real star of magnificent Frasier.https://t.co/jO6SNVun91

Oh no!! Frasier is a comic masterpiece and John Mahoney was magnificent in that role. What a loss https://t.co/7uYjP3xnPt

That’s so sad. Frasier was such a wonderful series & John Mahoney helped root it in reality. Thanks for so much pleasure. RIP. https://t.co/rCFIpKvh3c

Rest In Peace, John Mahoney. "Say Anything" is one of my favorite films of all time.

Today is a sad day. https://t.co/mgPhlgTKTv

Rest in peace, John Mahoney. So much I could say, but I think this captures so much of why I love him. Martin Crane's message for future generations: pic.twitter.com/lZlM665M6y

John Mahoney: Barton Fink, Say Anything, Eight Men Out, Iron Giant, Hudsucker Proxy, and huge part of why Frasier is one of the tightest, most well-executed sitcoms ever.

RIP to John Mahoney, who was so pitch-perfect as a retired Seattle cop that I remember being STUNNED to find out he was British

So sorry to hear of John Mahoney's passing. Met him once at Steppenwolf (brilliant in The Seafarer), got a chance to praise his work in Say Anything, et al. RIP.

The most brilliant speech in Frasier. Martin, John Mahoney, confronts his sons about his restaurant choice. pic.twitter.com/EgWBKkOcfe

RIP John Mahoney. Loved you in everything I saw you in. 🙁 pic.twitter.com/CduvbLZVgn

He’ll be remembered for Frasier, but John Mahoney’s turn as a Faulknerian screenwriter in Barton Fink is (also) one for the ages.

Page 2 of 2Page
Previous article: 12 Foods You Never Knew Were Illegal In The U.S.
Next Post: Meet The Keenan Family, Who Are Happily Stuck In The 1950s