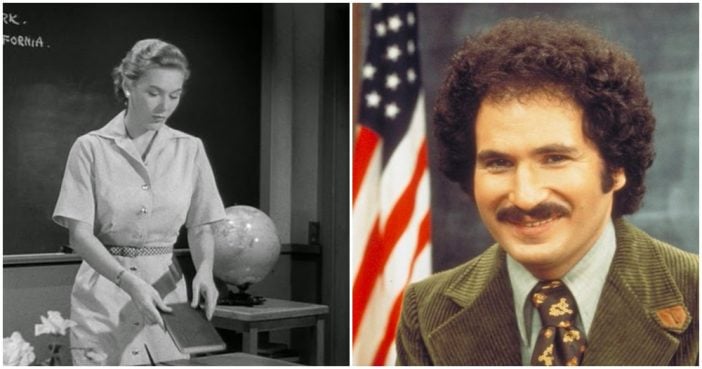 Picture this scene: hitting a fire alarm with baseball bat while shouting “Hell, no. I did not leave the South Side for this!” Yep, that’s Mr. Duvall, and you can’t blame the poor dude for his methods in dealing with raucous teenagers at North Shore High.

But under all that rage is a sweet and caring mentor and principal who seeks to provide the best education for his students. How do we know that? Because he hires the brilliant Ms. Norbury and has great taste (he has a crush on her). Anyone who can handle the Plastics as elegantly as he can deserves a Teacher of the Year Award.

When your teacher follows you from middle school to high school, and then to college, and … is also your neighbor, the relationship becomes more than just teacher-student; you becomes friends! Such is the case with Mr. Feeny and Corey Matthews.

It takes a while for Mr. Feeny to break through his hard and sarcastic disciplinarian shell, but when he does, he becomes a mentor and friend to his students. He even soften ups to Corey and his best friend Shawn Hunter who get up to no good most of the time. This teacher is here to stay! Read on to discover which other teachers are so legendary that you never want them to go away.

“I am not in danger, Skyler. I am the danger!” Oh yes, you better believe it. When a Nobel prize-winning chemistry teacher turns bad then you better watch out. It’s only natural that a teacher as cool as Walter White could manufacture the best crystal meth on the market called blue sky. Come on, his original motives behind creating methamphetamine were actually very admirable.

Bryan Cranston portrays the ambitious and super crafty White who devises a plan to overcome his stage 3A lung cancer. He needs to pay for treatment seeing that the cancer is inoperable, or in the event that he dies, he wants to ensure his family is well looked after. What better way than to use his knowledge to develop an alternative chemical process to create meth? Told you it was admirable … However, the crimes he commits aren’t too admirable. Read on to see if any other teachers are as resourceful as Walter.

If you’re planning to “live forever” then New York City High School for the Performing Arts is the way to go, and make sure its under the tutelage of Lydia Grant. Her tough teaching techniques and encouragement is exactly what students in the world of dance require – a world of brutal competition.

Famous for her line: “You’ve got big dreams? You want fame? Well, fame costs. And right here is where you start paying … in sweat.” Miss Grant, portrayed by Debbie Allen, really has got the moves to get her students drenched in sweat … and fame. On and off the screen, Allen choreographed and taught the numbers for the TV adaptation of Fame and came away with an Emmy for her fantastic moves.

14. Mark Thackeray in To Sir, With Love

When an aspiring unemployed engineer has to take up a tough teaching position at North Quay Secondary School in the East End of London, and totally rocks it, then you know he’s born for it. Staff members even warn Mark Thackeray, played by Sidney Poitier, that he’s in for quite a ride because the students at the school are pretty much unwanted at other schools.

When Mr. Thackeray braves his first class he quickly understands why the last teacher resigned; the students certainly get up to no good. After some ups and downs, he wins over the heart of each of his students with his adult approach, which places emphasis on personal choices and responsibility in life. Turns out teenagers appreciate being treated like adults and return the respect— so much so that Thackeray doesn’t accept his dream job offer because he loves teaching so much. Which other teachers changed the lives of their students?

15. Gabe Kotter in Welcome Back, Kotter

It definitely takes a former member of a “gang” to be able to understand a group of “unteachable” Sweathogs. Indeed, as one of the founding members of this remedial student group, Mr. Gabe Kotter tolerates all his students’ shenanigans in and out of room 111.

The actor Gabe Kaplan plays the quintessential Mr. Kotter who makes wisecracks like “up your nose with a rubber hose” and gets through to his rowdy students with his funny antics. After all, seeing that he works at his alma mater in Brooklyn, he already knows all the tricks the students have up their sleeves at James Buchanan High School.

Not only a professor and headmaster, this larger-than-life wizard is any kid’s dream mentor. By the time we actually become acquainted with Albus Dumbledore, he’s already the headmaster, but that doesn’t mean he isn’t the best adviser and support system to generations of wizards and witches.

Hogwarts isn’t the same without him (Dolores Umbridge made that quite clear), and what makes Dumbledore even more admirable is that he was in Gryffindor House during his time as a student. If you can tell the difference between the actors Richard Harris and Michael Gambon then you’re really a Harry Potter movie pro. Which other Hogwart’s teachers are worth a mention?

17. Anne Sullivan in The Miracle Worker

When you’re in need of some inspiration, look no further than Anne Sullivan. The best part is that this teacher really existed. Blinded herself at just the age of five, Sullivan is hired to take care of and teach the blind and deaf Hellen Keller.

With will and resolve, she is not only a teacher, but also a lifelong companion of Keller’s. After 49 years, a bond like theirs is unbreakable. Sullivan is the epitome of what a teacher should be, adapting teaching techniques suited to her student. Anne Bancroft won an Oscar for playing this challenging and moving role. Continue reading to see how these teachers went beyond teaching to inspire their students.

Alice Johnson is an idealistic teacher who breaks the mold by teaching in Walt Whitman High School, a multi-racial LA school in the ’70s. Her hard work and care for the students make her a stellar teacher; not to mention she’s really nice to look at too.

Karen Valentine, who portrays Alice Johnson, certainly gives off that air of a young teacher who wants to make a difference in the lives of her students in her American History class. She’s such a dedicated and enthusiastic teacher that she gets a full-time slot on the faculty team.

RELATED: Henry Winkler Opens Up About His 30-Year Absence From TV

Previous article: What’s Wrong with this Iconic Movie Scene from Pulp Fiction?
Next Post: Can You Name the Movie this Beautiful Home Belongs to?