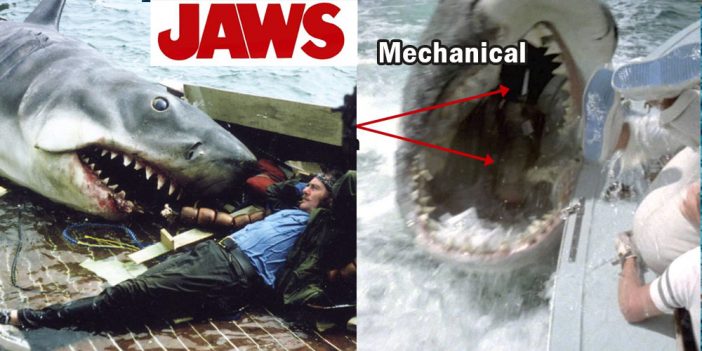 One of the most beloved movies of all time, one of Steven Spielberg’s earliest masterpieces, and the 7th highest grossing movie of all time, Jaws has left a major mark on the entertainment industry. Not only have it’s then-cutting-edge use of effects, it’s terror-inducing writing, and game-changing cinematography left a lasting impression on audiences around the world, the production was wrought with complications and secrets never before revealed… until now. Let’s take a look at 40 facts and secrets from the set of Steven Spielberg’s Jaws!

Not one, but three mechanical sharks were constructed for the film.

Knowing about the issue with captive sharks, the film crew decided to create a mechanical one instead. Three sharks were ultimately constructed: a “left” and “right” shark for side shots, and a full-sized shark for all other shots.

The sharks were collectively named “Bruce.”

Named after Steven Spielberg’s lawyer “Bruce M. Ramer”, the shark has since been a running joke with the two. Known as one of the nicest guys in Hollywood, they always found it funny that he got turned into one of the most iconic movie monsters of the 20th century.

After the full-sized shark sank during its first time in the water, the crew also nicknamed the shark “Flaws” or the “Great White Turd.” The sharks have now been known as one of the biggest failures in special effects… but the majority of the public would never know.

The Sharks were connected to a 16-ton platform on the ocean floor.

Nicknamed the “Iron Monster”, the sharks were connected to giant mechanical arm used to control the sharks. The Arm was then attached to a 16-ton platform on the ocean floor.

The sharks were a major disappointment

With the combined cost of $225,000 (nearly $1 Million in today’s currency), the sharks were a huge letdown for the crew. Due to the fact that the sharks just didn’t work, the movie was “reorganized”.

The first shark doesn’t appear until 1 hour and 21 minutes into the film.

Due to the malfunctioning sharks, the movie was “reorganized” to buy the production more time to figure out the shark issue. In the end, Jaws only had 4 minutes of screen time.

The movie Jaws was developed from a book

Jaws were written by Peter Benchley, and though he says the book is pure fiction, Benchley says he was inspired by the capture of a 4,500-pound shark off the coast of Montauk in 1964.

Benchley, who has since become an ocean conservationist, said he regretted writing a book that portrayed sharks in such a cold-blooded manner. He feels responsible for the bad wrap that sharks get in pop-culture these days.

The book was originally called Silence of the Deep

Benchley originally titled the book Silence in the Deep before he asked his father, the children’s books author Nathaniel Benchley, for suggestions. The senior Benchley sent back a list of 200 possible titles, including the now-famous monosyllabic title, and some lengthier options; for example, Wha’s That Noshin’ On My Laig? The title Jaws was the only one both Peter Benchley and his editors could agree upon.

Steven Spielberg originally thought that the movie was about a dentist.

Steven Spielberg, the film’s director, first became aware of the book when he noticed it on top of a large stack of papers in his producer’s office. He initially thought it was about a dentist.

Page Page 1 of 4
Previous article: Guess Which Actor this Kid Grew up to be?
Next Post: 8 Old-Fashioned Valentine’s Day Traditions We Wish Would Come Back