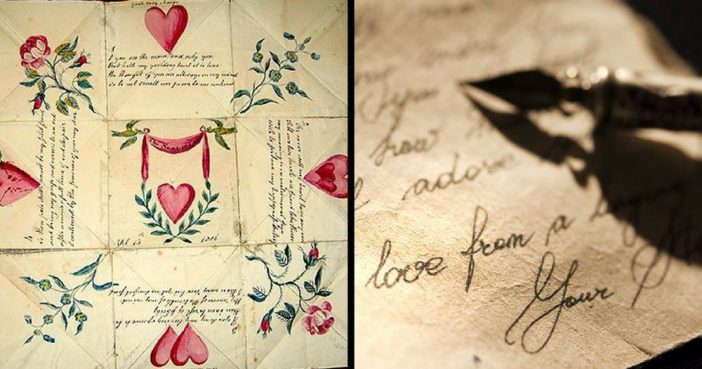 Those expecting to shell out for gifts and romantic dinners for Valentine’s Day dropped by 10 percent in 2017 versus 2016. But the drop in spending is not because Americans don’t like the holiday—it’s the result of a new attitude: Couples nowadays want to celebrate their love year-round and do it in less expensive ways. “I’m not surprised that Valentine’s Day has become a holiday in which people say, ‘I don’t need to spend money,'” Candace Corlett, the president of WSL Strategic Retail told the New York Post. “There’s a mindset now that says, ‘Let’s celebrate our time together.'”

With this new sentimental (and cost-effective) outlook in mind, here are seven bygone Valentine’s Day traditions that we’d like to see make a comeback. They’re all things you can do for free (or practically free), which will help put the emphasis on making memories with your spouse, friends, and family members.

Long before Hallmark and the mass-produced greeting card industry existed, people used to send one another Valentines that were customized with personal messages.

Handwritten holiday cards were the norm until 1847, according to The Huffington Post. Though pre-written cards are more convenient, there’s nothing quite like a one-of-a-kind love letter from your sweetheart.

Also before the days of buying cards in bulk, people of all ages used to design and create unique cards from scratch. In the eighteen and nineteenth centuries, lovers spent considerable effort creating something beautiful.

“These cards often featured elaborate cutwork lace, ribbons, and trimmings, or etchings of birds, butterflies, flowers, and other vernal images: small-scale, small-budget works of art,” writer Sara Davis explains over at Table Matters. Your skill set doesn’t really matter here—it’s the thought and effort you put into the card that does.

If you really want to go all out with a handmade of expression of your love, take a cue from the Victorians and make a “puzzle purse.”

These gifts were a series of love letters that were meant to be read separately but also fit together to create a beautiful design and message, according to Bustle. Use the Valentine puzzle purse tutorial from VictorianTreasury.com to make one at home this year.

Though it’s never been quite as popular in the United States, Denmark couples have traditionally celebrated the romantic holiday by sending one another pressed white flowers called snowdrops, according to The Huffington Post.

The best part? These dried flowers last much longer than fresh ones.

Rather than dropping a ton of money on a fancy dinner for two, couples used to attend Valentine’s Day dinner and dance parties in private homes across the U.S., according to the Society for the Confluence of Festivals in India.

This more affordable celebration is also a great way to spend the day with all the loves of your life, including friends and family.

If you’re going to give a mass-produced card to your partner or spouse this year, give a card that shows off your sense of humor, like the Victorians did.

“They had a wicked sense of humor,” Jayne Burgess, the manager of the Manchester Metropolitan University Special Collections explained on their website. They didn’t take themselves too seriously and used their cards as a chance to make their partner laugh.

One tradition that seems to have disappeared completely is the exchanging of ornate chocolate boxes. Richard Cadbury, the heir of the renowned British chocolate empire, is credited with creating the first heart-shaped box for the holiday, according to History.com. He purposely sold chocolates in a beautiful box hoping the customers would treasure the pretty packing and use it again to store other items like love letters. (In fact, antique Victorian-era Cadbury boxes exist today and are considered valuable heirlooms.)

This year, instead of giving chocolates and candies in cheap, plastic packaging, place your treats in a beautiful box worthy of holding onto forever. Who knows, maybe your box will be a collectible one day, too!

In addition to a handwritten or homemade card, you could compose a sweet poem for the one you love. According to some historians, the oldest Valentine in history was a poem, written in 1415 by Charles, Duke of Orleans.

You can make yours cheeky, sentimental, or lovey-dovey—either way, we’re sure the recipient will be thrilled by whatever message you craft.

What are your thoughts on this Valentine’s Day? Let us know in the comments below!
RELATED: DIY: 22 Valentine’s Day Mason Jar Ideas That Will Steal Your Heart
Click for next Article
Previous article: 40 Jaw Dropping Facts You Probably Never Knew About “Jaws”
Next Post: What’s Wrong with these Iconic Images? #15