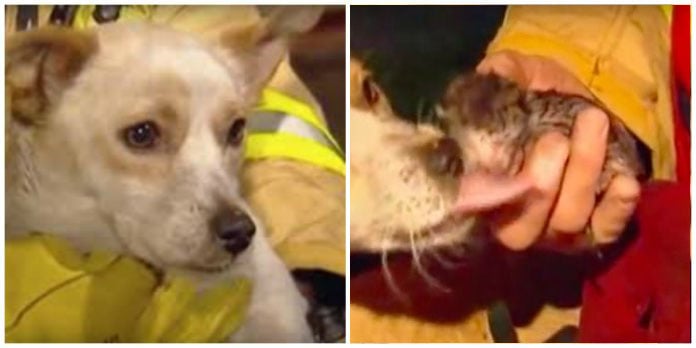 When we think of heroes, we usually think of people with big, giant muscles, crazy superpowers, and capes flowing in the wind. Sometimes, however, they come with fur and four legs, just like Leo.

Firefighters responding to a house fire in Melbourne, Austrailia arrived on the scene to find the family had safely evacuated the house along with one of their dogs, Barney. Unfortunately, they still had another dog, Leo, stuck inside.

After waiting for a while without any sign of Leo, the family started to fear the worst. Firefighters rushed in to save him, but couldn’t find him at first. Several minutes of frantic searching later, they finally saw something on the ground in one room. Upon closer inspection, they realized it was Leo.

Rescuers rushed over to save him, but they were in for a shock when they looked underneath him.

It turns out Leo stayed behind to watch over the family’s four kittens, who were also trapped in the house. He laid down on top of them to keep them safe and was unconscious by the time the firefighters got to him.

Luckily, they found him just in the nick of time and revived him with oxygen. As Leo started to regain consciousness, he seemed uneasy. Something just didn’t feel right to him.

That’s when they decided to bring the kittens over to him, and Leo immediately began showering them with kisses. He was genuinely overjoyed to see that they were all safe and sound.

Naturally, the family was delighted that everyone was fine, and they were so proud of Leo’s heart of gold.

Watch the video below to see more and be sure to SHARE this with your family and friends.