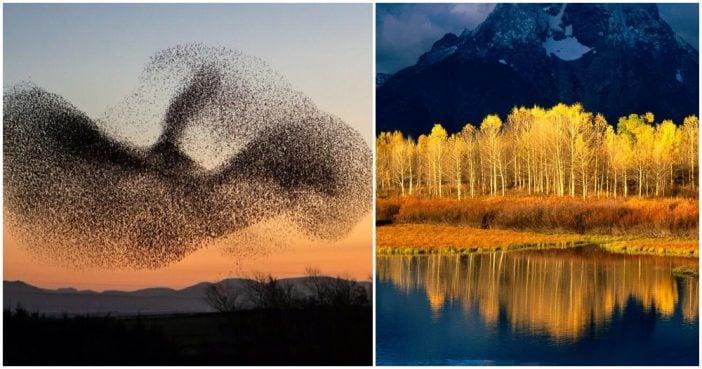 It’s easy to get lost in cars and offices and grocery stores and forget that there’s a bigger, more beautiful world we don’t always get to see. But there’s stunning stuff happening every day, in some cases right outside your door.

So let’s take a whirl through some of the most incredible, sometimes mind-boggling phenomena the Earth has to offer — along with a little of the science behind them.

It’s pretty hard to study, but researchers have a few ideas about what causes it. One of the most common is that during an eruption, ash picks up so much friction that the build-up of static electricity causes lightning.

These beautiful sky paintings have nothing to do with fire or rain, as weather-loving people are very quick to point out.

They’re actually caused by the sun, very high in the sky, shining through a particular type of ice cloud formation. That means that how rare they vary with how far north or south you are.

Like fire rainbows, halos require just the right formation of ice crystals in clouds high above the surface of the Earth to bend light from the sun into a perfect ring.

The same phenomenon can also happen with moonlight, although moon halos are usually white and sun halos can be rainbow-colored, like this one.

It’s pretty clear how this phenomenon got its nickname: It looks like a tornado, but it’s made of fire. “It’s just like a spinning column of flames,” forecaster Michael Watkins told the Los Angeles Times.

They form when wind patterns twist an active fire into a column.

About once a year, the US sees one large fire whirl — as tall as 1000 feet. Fire whirls can spread fires not only directly, but also by scattering burning debris.

These ice spikes, called penitentes, form at high altitudes, where sunlight turns ice directly into water vapor, rather than melting it to water.

Sunbeams vaporize small dimples on the snow’s surface. Then, the uneven surface directs sun into the dips and away from the peaks, exacerbating the trend.

Penitentes can grow as tall as 15 feet.

Watch them grow and die:

I know what you’re thinking — I must have gotten my images mixed up, that’s a bird’s nest, there’s no way that came out of a volcano. But it did, from Hawaii’s Mt. Kilauea.

The wind can catch individual droplets of lava and stretch them into what’s basically glass wires. Strands can reach as long as 6 feet.

While in Hawaii the phenomenon is named for Pele, the goddess of volcanoes, it’s also found in Norway, where it’s known as Witch’s Hair.

Salar de Uyuni in Bolivia is both the world’s largest salt flat (it’s about 4,000 square miles) and the home of half the planet’s lithium, a key component in most electronics’ batteries.

The wet season turns it into a perfectly reflective lake.

If you live in Ohio, West Virginia, or their neighbors, you’re experiencing one of the planet’s entomological miracles: periodical cicadas.

Depending on the “brood” (this year’s is Brood V), periodical cicadas coordinate their life cycles over 13 or 17 years. Brood V are 17-year cicadas, which means they were born in 1999 and have spent the years buried underground, sucking the juice out of plant roots — in fact, they’re North America’s longest-living insect. Now, they’re emerging, singing to mates, mating, laying eggs, and dying, all over the course of a few short weeks.

Their offspring will emerge again in 2033.