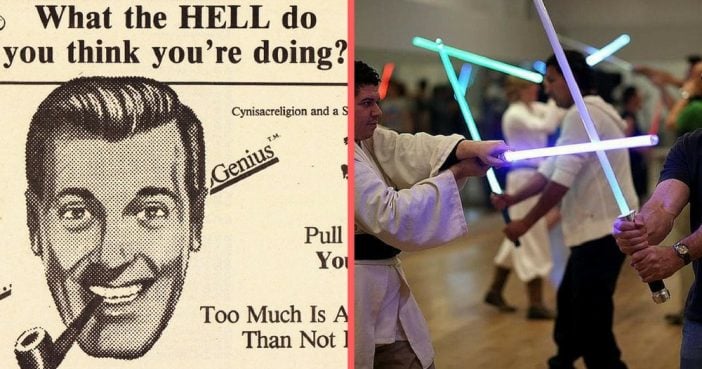 Some of the world’s most unusual religions are described below!

The use of Swastika as a religious symbol has caused this group some problems in Israel.

2. Church Of The Flying Spaghetti Monster

Also known as Pastafarianism, the religion worships the Flying Spaghetti Monster. There is only one dogma – No dogma! The official beginning of this religion was marked by an open letter from Bobby Henderson to the Kansas School Board, demanding that the theory of the Flying Spaghetti Monster (FSM) should be taught alongside intelligent design and theories of Evolution.

Seen by some as a satire against religion, Pastafarians believe that the universe was created by the FSM while very drunk, the effects of which can be seen in the resulting imperfections in the universe.

3. Church Of The SubGenius

The most aggressively preposterous theology the world has ever known. Established by American writer and filmmaker Ivan Stang in the 1970s, the Church of the SubGenius is a parody religion that satirizes better-known belief systems. It heavily disregards the idea of absolute truths and instead focuses on a more interpretive lifestyle.

Discordianism is the religion or belief in which chaos is thought to be as important as order. It is more of an elaborate joke disguised as a religion and can be best described as an illogical work of surrealist art using religion and philosophy as an artistic medium, with the halfway serious intent to occupying a human being’s ‘world-view’ with something inherently skeptical.

The constant increase in human population with a simultaneous decrease in values and morals led to the birth of this church whose sole commandment is ‘Thou Shalt Not Procreate.’ The four pillars of this religion are suicide, abortion, cannibalism, and sodomy. The Church of Euthanasia was founded by Reverend Chris Korda and Pastor Kim in 1992.

It’s most popular slogan is “Save the planet, kill yourself.”

Page Page 1 of 2
Previous article: How Sophia The Robot Wants To Be Like You
Next Post: Paul Lynde: The Outrageous Story Of TV’s Off-Centered Square