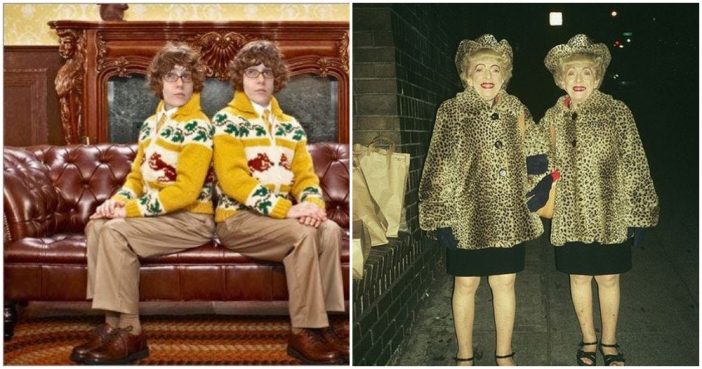 There’s nothing wrong with twins. They’re just another miracle of life like the rest of us! Well, I guess I should say there’s no such thing as the “rest of us,” we’re all the same — twins included! Most of the time, twins are just two moderately confusing people. It’s confusing when they look alike and it’s confusing when they don’t. We’re not here to talk about those twin friends and their adorable rhyming names. We’re here to talk about that Shining-level of twin business where the only thing freakier than one person, is two freaky people. Two freaky folks that share every aspect of their DNA and are probably telepathic, or at very least, would murder for one another. That’s at the very least, but we can get to that later. Here are 15 photoshoots revolving twins that are just downright confusing.

1. Monsters In The Making

Sure, their lives turned out totally normal and mundane. Let’s pretend these aren’t the chubby faces of two youngsters that just shot a polar bear in its heart because they devoured a snowshoe rabbit that made the mistake of getting too close. Yeah, these are totally normal children with no malice in their hearts. They absolutely stand with the posture of a British soldier. It’s not like those aren’t the deadest eyes I’ve ever seen, and those chubby faces don’t emanate a chill much colder and stranger than whatever winds whipped past their little bonnets. Of course, those twins don’t look like the kind of children who would say they wanted to see what an animal looked like on the inside. They’re two totally normal dead-inside baby twins, right?

Well, I highly doubt that two men with such shiny hair lack the resources to buy a second turtleneck. If you calculate the money they must have spent on conditioner, it’s at least enough to buy another shirt. I also doubt the necessity of anyone that Nordic-looking (and generally pale) wearing white ever — even if their skin is absolutely free of any blemishes, but we’ve got bigger problems than that. Maybe their embrace is so upsetting because we know they shared the same hug for nine months as they developed and became twins. Maybe it’s just tough because they’ve elected to be photographed inside a makeshift cocoon. Oh boy, this picture is really the gift that keeps on giving, even when we respectfully ask for it to stop. So please stop this torture; stop staring at me with your self-satisfied smugs.

Great, so I won’t buy whatever these young girls are selling since it’s most likely poisoned. Or I will buy it, whatever angers them less and keeps them from attacking. Oh, a cereal that causes me to strangle my beloved pets and also tastes like synthetic cinnamon? Well, what else would demon twins be selling? What horrific—possibly cursed—Girl Scout cookies that box is a sick imitation of. Of course, if these girls came to my door, that’d be even worse. Then they’d know where I live. Actually, if any of these twins know where I live (especially the Olsens), I’d eat up that cursed cereal, go on a rampage, and stay safe in a high-security prison. Where no twins can break in. (At least I hope not.)

4. The Most Annoying Twins

Other sets of twins might be horrifying or creepy or possible ghosts, but they’re not aggravating. They don’t annoy you with their tans and frosted tips; they terrify you with their hand-sewn lace-necked Victorian dresses. These Scandinavian demons change all that. They’re the Ed Hardy of abominable twins. They’re the gatekeepers of an unbearably loud, strobe light-spangled purgatory where you can only ever find a bathroom for the opposite gender, but not your own and you always have to pee. A terrible place where you can scream for water, but only ever get orange-flavored sparkling water. They’re the gargoyles preventing our escape from a disgustingly muggy indoor space where the sheer density of bodies can cause an asthma attack. They’re just the worst. Believe me.

5. Twins That Jazzercise Together

Boy oh boy, what a talented family. Not only can they sew matching tie-dye tank tops, and grow bangs at different lengths that are identically odd, they can also do whatever watered down gymnastics-like nonsense this is. Does the one in front rub it in her sister’s face that she can do full-on splits? Will that foster a lifelong grudge that ends in homicide? Is that little girl wearing a teal sports bra or do her leggings go up all the way like some female wrestling uniform? Who knows! For now, they’re just two young girls about to be laughed off the stage at whatever sleep away camp talent show they’re about to perform at. Wow, the beginning of such an uncomfortable, bitter tale. Of course, it’s started with teal Spandex, as many tragedies often do.

The only thing cuter than these two little munchkins in their Sunday finest is how such a young child could consider the man whose liver she’ll someday eat raw, with absolutely no expression. Oh, to be the photographer that posed these girls and assumed their gazes passed for adoring and not ravenous. What an innocent, stupid photographer to not notice that when these little girls smile, they actually have giant direwolf-sized fangs in their mouths that can’t wait to devour their only caretaker. Does this older brother (or pale uncle) deserve the trap they’ve set for him? Honestly, this picture was taken back when people paid money to see twins, so we can safely assume he deserved that and worse. What a completely horrifying family!

7. So Many Years Together

Oh boy, to have seen so much of life and still opt for leopard print. What a life garishly lived. And what fur coat is complete without a matching cowboy hat? Why, what’s the use of cheetah print if it’s not spangled across two terrifying twins? Sure, let’s delve into that unique hell shared by them was the only person they’re more likely to kill than us is each other. Why not pretend it was by accident when one turns up dead? It’s less horrifying than a full-on look into their lives, so let’s just not question the circumstances that cause two grown women to dress identically. In the words of a wise traffic cop that’s one more DUI away from being kicked off the force, “there’s nothing to see here. Move along.”

If we’re this deep in this twin mansion, that we’ve made it to the drawing room, it’s probable that we’ll never get out. Say goodbye to the welcoming sunshine of a world filled with totally distinguishable people, because we are now prisoners of the Cardigan Twins. Yes, we shall all eat the porridge these twins eat for every meal and draw their lukewarm baths. What’s their assigned sex, anyway? When did mustard become a color for holiday sweaters? Was the money that paid for that elaborate fireplace earned by murder? Oh boy, so many questions with positively no answers. And yet — with our eternities spent as these twin’s captives, I’m sure we’ll piece together a few answers that leave us with even more perplexing realities over the decades. What fun!