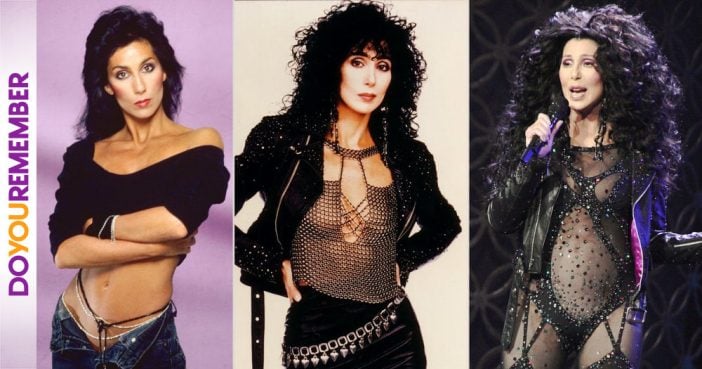 We have done a lot of posts about Cher on Do You Remember. Why? Because there are only a handful of superstars (Madonna, Prince, Elvis, Sting, Bono to name a few) who can carry a single name and whose career transcends decades. Cher is one of those superstars. Enjoy clips from her top 10 singles, and an “original” video we put together to honor Cher.

Following are the all-time top 10 best singles of Cher:

Co-written by Desmond Child and Diane Warren and peaked at #8 as a pop hit and #9 adult contemporary in 1989.

“The Beat Goes On”

This 1967 Sonny and Cher song peaked at #6. “The Beat Goes On” and “I Got You Babe” became their signature theme songs.

“Bang Bang (My Baby Shot Me Down)”

This was her very first #1 pop hit single Released in 1971, it was produced by Snuff Garrett, the same guy who produced Vicki Lawrence’s #1 hit “The Night the Lights Went Out In Georgia.”

Cher earned her third #1 hit with “Dark Lady,” which was written by Johnny Durrill, of the Ventures and was released in 1974.

“The Way Of Love”

“If I Could Turn Back Time”

The song was written by Diane Warren and released in 1989 and became Cher’s biggest hit in 15 years. You might remember her wild and revealing outfit as she straddled on the battleship USS Missouri.

The absolute biggest worldwide hit of Cher’s career was “Believe”. The song remained #1 for four weeks and won a Grammy for Best Dance Recording.

We hope you enjoy this and please share this post with friends and family so that they can enjoy it too.

Previous article: What Happened Today Throughout The Years… May 7
Next Post: Tom Jones’ “It’s Not Unusual”