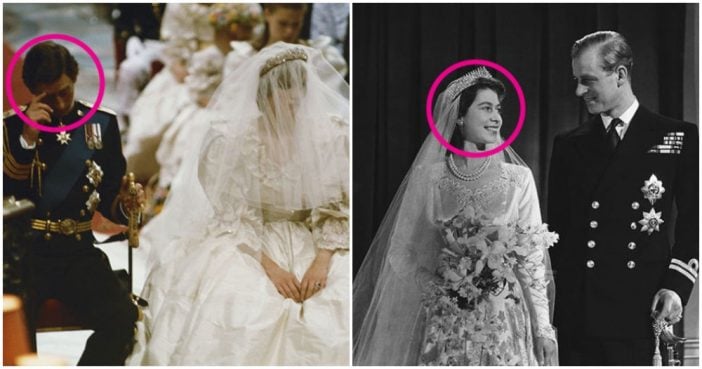 A lot of time and sweat goes into a royal wedding planning. A team of hundreds works tirelessly to make the grand day seem as flawless as possible.

But, to err is human. So, despite all the planning, there are certain things that remain out of human control and can mess up this highly organized event. Here are some examples.

Although he didn’t doze off mid-way into the ceremony, he certainly was exhausted. The reason – the edginess that usually accompanies weddings and a crowd of fans cheering for him outside,  throughout the night.

Imagine the family heirloom that is supposed to mean so much on your wedding day, breaks right before it! This happened with Queen Elizabeth’s Fringe Tiara, made for Queen Mary in 1919. The hairdresser accidentally broke it on the morning of the wedding. It was immediately taken to House of Garrard workshops where it was repaired. Fortunately, the Queen was able to wear it in her wedding. Imagine the fright she must have been in!

3. The Case of Messed Up Vows

As mentioned earlier, Princess Diana made a big blunder when she mispronounced Prince Charles’s name. She said, “Philip Charles Arthur George,” instead of “Charles Phillip.” I can imagine the awkward silence that might have followed after.

5. Leaving the Bouquet Behind

It happens! I mean it’s your wedding. Plus, you’re a Royal. The pressure is real. So, it is quite imaginable and forgivable that Princess Nathalie zu Sayn-Wittgenstein-Berleburg of Denmark left her bouquet behind and had to wait a full ten minutes for it, before going down the aisle.

6. The King Died At His Friend’s Wedding.

King Harthacnut, England’s monarch from 1040-42, completely sabotaged his friend’s wedding by dying due to excessive consumption that led to a stroke.

Those tiaras look so beautiful! But wait until you have to wear one for the entire course of the wedding. Apparently, Princess Diana’s Spencer Family Tiara that she wore for her wedding gave her a splitting headache. On top of nerves that won’t rest and performance pressure, having a headache during the Royal wedding is really not a pretty picture.

Page Page 1 of 2
Previous article: 15 Interesting Facts About Captain Kangaroo – Show That Enthralled the Young And the Old Alike
Next Post: Genius T-Shirt Pairs You Wished You Thought About First