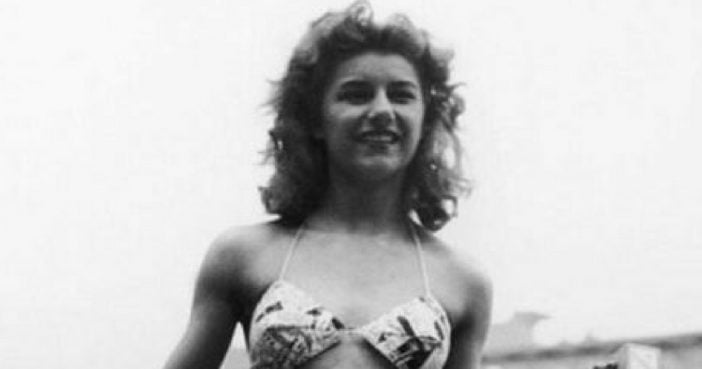 Imagine doing your grocery shopping in nothing but your bra, your underwear and a pair of sensible sneakers. Aside from your body breaking out in stress-hives, what do you think would happen?  How long do you think you could rummage through the bread aisle for your favorite 7-grain before the store manager gently asked if you were off your meds?

Now imagine migrating over to the produce in the same thing, but this time your underwear is made out of a very particular combination of nylon and spandex and on your feet are a pair of sandy flip-flops and slung over your shoulder is a sandy beach towel. I’d venture to guess there would be nary a hive nor passive aggressive store manager in sight.

Context is everything, right? That which society deems appropriate in a given place during a given time is nothing if not a transient and subjective reflection of the current zeitgeist.

Swimwear is a particularly interesting study on this, because while you might think an outfit designed for exerting physical energy while submerged in a body of water would lean more on the utilitarian than the stylistic, I’m not sure any other article of clothing has undergone a larger transformation in Western society over the last 200ish years.

If you’re as curious as I am about how we went from beach gowns to strings up our butts, join me in unpacking the hot, steamy and uncomfy history of the bathing suit.

What to wear to the beach…

Forecast says it’s going to be a hot one, so might I suggest you grab your triple-layered gown in a light and airy fabric? Just make sure the hem is weighted so a man can’t take a suggestive peek at your ankle should the wind blow your way. All your skin should be covered save for a sliver of your face, which will surely be smiling through the sweat because you love the beach!

At least hypothetically. Since trains aren’t a thing yet, you’ve never been before.

Pair your nicest flannel collared dress with your nicest Turkish bloomers to communicate you’re not only fun but layered. Although your arms can occasionally come out to play, they ought not to brag to your other hot and steamy appendages, like say, your feet, which should be covered at all times by simple or lace-up bathing slippers which your great-great-granddaughter will want in, like, 150 years. Moving easily is for suckers. And men.

Please wear a hat. Your head is too sexy for this world.

As beaches are getting more popular, the layered bloomer look is starting to feel a little burdensome, no? Slip into a single-piece bathing costume that cuts closer to your body. Take the one worn by Australian swimmer Annette Kellerman in the 1907 Olympics, for example.

You know, the one that got her arrested for indecent exposure but ultimately guided the progression of swimwear and enabled women all over the world to move their limbs whilst within the vicinity of water?

Now that the world doesn’t mind seeing the curve of your hip on a sunny afternoon, why not show a little more? It is wartime after all, and less fabric means cost savings and corporeal comfort. If you’re careful to only show a hint of your stomach you might even try a two-piece, which is cheaper to produce.

Just don’t show your navel; it would drive your most oppressive dates up the wall.

I know you prefer to be ahead of the curve, so maybe throw on the revolutionary bikini introduced by designer Louis Réard. He named it after the Bikini Atoll and couldn’t get a model to wear it for its debut in Paris so he had to hire a stripper. Are you a stripper? Does your belly button need some sun?

If no and/or you prefer to play it safe, then consider a one-piece with feminine details like ruching or a sweetheart neckline, because figure flattery is all the rage right now. Not that you need it.

Page Page 1 of 2
Previous article: Old Woman Teaches a Lesson To a Rude Driver That He Will Never Forget
Next Post: In 1971 A Teen Falls 2 Miles From A Plane And Weeks Later She Shows Up Alive