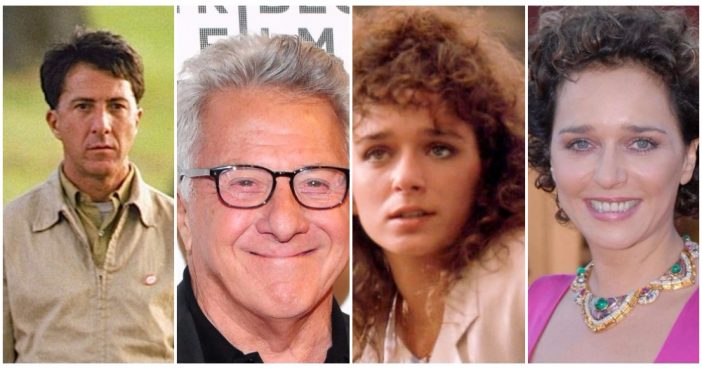 It’s been over 30 years since Rain Man, the exciting, feel-good film about a selfish yuppie, Tom Cruise learns to be a better person thanks to his autistic savant brother, Dustin Hoffman opened on December 16, 1988. Before looking at the cast of Rain Man

Rain Man won four Oscars, including Best Picture, Best Original Screenplay, Best Director, and Best Actor in a Leading Role for Hoffman. It was also nominated for cinematography, film editing, and score (Hans Zimmer’s first in Hollywood). Even with the beloved New Yorker critic Pauline Kael calling it “a piece of wet kitsch,” audiences ate it up. Rain Man was the highest-grossing film of 1988 at $172 million and in 2019 it’s still ranked in IMDB’s Top 250 films!

The film might have looked very different: Jack Nicholson and Robert De Niro both turned down the part and agents at CAA initially pictured Bill Murray as Raymond, with Hoffman as Charlie. Once cast, Hoffman spent time with the real savant who inspired Raymond, Kim Peeks. According to IMDB, Hoffman got to play Charlie anyway, since he and Cruise switched roles during rehearsal.

The leads remain two of the busiest actors in Hollywood, but what’s the rest of the Rain Man cast been up to in the last 30 years?

After 1986’s “Top Gun,” Cruise was one of the biggest stars in Hollywood and the perfect guy to play impatient hot-shot Charlie in “Rain Man.” The next year, Cruise went even more serious with “Born on the Fourth of July,” for which he received his first Oscar nomination. He continued strongly in the ’90s with “A Few Good Men” and “Jerry Maguire,” then launched his lucrative and long-running “Mission: Impossible” series. His next film is “Edge of Tomorrow” and there are plans for him to return as Jack Reacher

The Italian-born actress moved to Los Angeles in 1988 and that same year landed roles in “Big Top Pee Wee,” and “Rain Man,” as the girlfriend of Tom Cruise, still one of her best-known roles. She also appeared in both “Hot Shots!” movies and narrowly lost out on the leads in “Pretty Woman” and “Flatliners” to Julia Roberts. In 2013, she directed her first feature film, “Miele,” which screened at Cannes. She most recently starred in the Italian TV series “In Treatment.”

Molen is primarily a producer, having worked on several of Steven Spielberg’s films, including “Jurassic Park” and “Minority Report.” He has only six acting credits to his name, including this film, as the doctor who’s in charge of Raymond’s money and custody.

Before playing Vern, Charlie’s kindly caregiver, Roberts starred as Rooster on the ’70s series “Baretta.” He’s guest starred on TV series from “MacGyver” to “Seinfeld,” and most recently starred on “The First Family” series as Bernard.

Page Page 1 of 2
Previous article: Happy Meal Toy People Were Obsessed With By Year
Next Post: Wait Till You See What the Cast of ‘Saved By the Bell’ Looks Like Today!