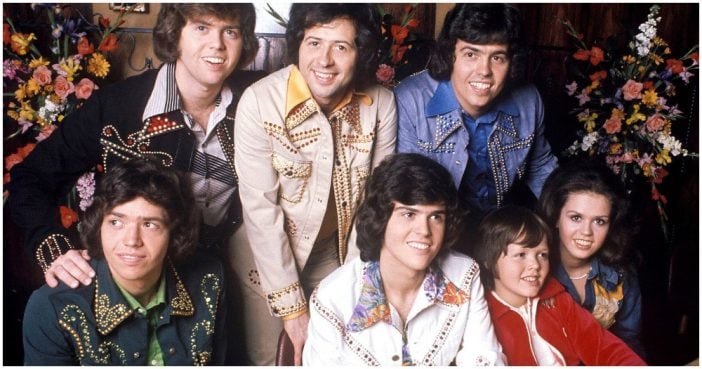 The Osmond Family have been in the limelight for over four decades now, starting as a relatively unknown barbershop quartet and quickly becoming one of the most well-known families in the world. The Osmonds weren’t one single act, but a group of several acts such as The Osmonds and Donny & Marie.

And many of the Osmond family are still in the limelight now, in one form or another. The group first started with Wayne, Merrill, Alan, and Jay, the original barbershop quartet. Donny and Jimmy Osmond joined the group a little later on, creating The Osmonds pop band. It’s with The Osmonds that the family saw the most success until their sister Marie got involved. While she didn’t often sing with the boys, she carved out an impressive solo career at a young age.

Donny & Marie soon followed a show featuring one of the most popular brothers and their only sister. While the Osmond family may have had an incredibly fascinating life, it’s also been one filled with darkness, trauma, and troubles. Not everything has been all fame and flashing lights for many of the Osmond family.

Success at such a young age can be a dangerous thing to handle, even with such stringent Mormon beliefs. While many avoided the temptation of drink, drugs, and the rock and roll lifestyle, this didn’t stop bad things from happening to many of the Osmond family members. Some suffered greatly with being in (or even out) of the limelight. Others were abused or faced a tough time from producers and management. The stories of the Osmond family are some of the best-kept secrets of all time. Some of which have only been briefly touched upon in interviews or in books written by family members. Let’s piece together some of those best-kept secrets and find out what the Osmond family are really all about.

The Donny & Marie show was renowned for some of the incredible celebrity guest appearances throughout its run. While this may have been good publicity-wise, for the show, it wasn’t always so good for Marie. She remembers back when Groucho Marx was a celebrity guest and how he would pinch her. She went on to say “he was a dirty old man.” Not exactly the perfect environment for a young girl to be in.

When she was only 15-years-old, Marie Osmond recalls how tough things were for her; particularly when it came to the pressures of staying thin. The pair were offered their own TV show, but producers threatened to cancel it if she didn’t lose weight. At the time she was just 103 pounds but stopped eating in order to get down to 97 pounds. She said producers said she was “obese, disgusting and a disgrace to my family.”

Who knew that Donny Osmond was such a talented tech-lover? The secret video control room at the Flamingo (Las Vegas) was designed by Donny, along with various audio and computer systems backstage. All of the video montages in the show were put together by Donny when he wasn’t on the stage of course. Donny once said, “It’s my little world in here.” The star has admitted he’s a “total nerd,” specifically when it comes to Mac.

Behind the smile of Marie

In one of the most harrowing revelations of the century, Marie Osmond admitted she had a dark secret behind those angelic eyes and cute smile. In her book, Behind the Smile, Marie talks about the abuse she had to suffer from as a child. Dark stories of her privacy being invaded and, in her words, “most damaging, to be abused sexually.” Marie still refuses to say who her abuser was, only clearing her family members and close friends of any blame.

The church is one of the most important things in the Osmond Family’s lives, which is why 10% of their earnings has always gone to their church; a church that helps huge numbers of people across the globe. Donny also runs the Osmond Foundation for the Children of the World, while Marie plays a big part in the Children’s Miracle Network. This isn’t where their generosity stops, however, as the entire family are always giving to charity.

At home, Donny is known as “Uncle Donny” to pretty much everyone that knows him. However, when his friends or kids that he works with come to visit Las Vegas, he has to show them that he’s “a little more than Uncle Donny right now.” He takes everyone who visits to the Bellagio bridge where you can see the huge Donny & Marie ad which is projected onto the flamingo. Just Donny’s eye on this projection are 6 feet tall and 10 feet wide.

When the Donny & Marie show started in 1976, Donny was just 17 years old. He wasn’t working a 9 til 5 job like most other 17-year-olds, however. In fact, the schedule for the Osmond siblings was so intense it would put most other celebrities to shame. The pair were known to work 20-hour days, having to learn new songs, new dance routines, and dozens of different scripts. There was never even a hint of exhaustion on either of their faces, however, which is pretty impressive.

No one likes their name being spelled wrong, and Donny Osmond was no exception. It infuriated him when people spelled his name with an ‘ie’ instead of with a ‘y’ on the end. The crew at the Flamingo thought it would be a hilarious prank to spell it wrong on the gold star on his dressing room door, which we’re sure Donny didn’t appreciate. However, as a forgiving Mormon he also probably let the prank go.

Dancing on the tables

As a born performer, Donny Osmond is known for going all out during his performances. Marie Osmond, during an interview, has spoken about how her brother does get carried away sometimes, especially when it comes to dancing on the tables. Her top tip? “Hold on to your beverage.” If you ever go and see a show, and are sitting at the front, you’re best off getting your drinks in plastic cups!

Ever wondered what a day in the life of Donny Osmond looks like? According to sources, he’s awake at 6 am to drive his son to the airport (after just 4 hours of sleep). His business manager gets a call before Donny tries to squeeze in another hour of sleep, and then it’s time to record for his Disney cartoon show. Next up, he works out, before doing his show with Marie. On tour, his schedule is slightly different as it’s basically bus, rehearsals, show, repeat. He does try and squeeze in some reading on the bus, however.

Previous article: Find the Letter “T”
Next Post: See The Cast Of ‘Say Anything’ Then And Now