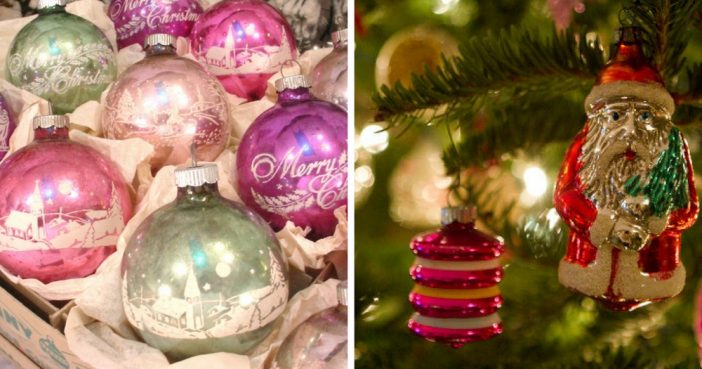 Every one of us has their own special memories of the Christmas holiday, but one of my favorite memories was decorating the tree with an assortment of magical shaped, silvered and painted  “Shiny Brite” glass ornaments.

My favorites were the ornaments featuring concave mirror-like center holes (called indents). Unfortunately, I found out the hard way: “Don’t poke the pretty reflective mirror in the center of these ornaments….Ouch!”

Today, vintage Shiny Brite ornaments can be very collectible-if found in their original boxes- and kept in top-notch condition. Shapes and age of the ornaments are other important factors avid collectibles look for.

Check out some vintage ornaments

Believe or not, hand-blown glass decorated ornaments or baubles have been around since the late 16th century in Lauscha-a town in the district of Sonneberg, in Thuringia, Germany This town has been well-known for its several small glass-blowing companies.

In fact, during the year 1835, a local glass blower, Ludwig Muller-Uri invented the artificial glass human eye. A few years later, Hans Greiner created free-form, blown glass ornaments, and by the 1870s, the town of Lauscha was exporting the hand-blown glass ornaments to Britain.

In the 1880’s, after a visit to Germany, the famous business entrepreneur F.W. Woolworth became a huge buyer of the German, molded glass ornaments,  Before WWII, all glass ornaments were made in Germany, so Woolworth Stores worked with a German businessman named Max Eckardt for sales and imports who had an office in N.Y.  During the 1920’s, with the help of relatives in Germany who silvered and intricately decorated ornaments; Eckardt decided to start his own line of ornaments from a warehouse in N.Y.C. They came in different shapes-balls, figurals, cottages, lanterns, bells, acorns etc., and were embellished with stencils, glitter and lacquer paints. These ornaments were sold under different two names: Shiny Brite and Max Eckardt & Sons.

In the 1930s, with another war on the horizon, Eckardt realized his imported supplies may be effected so he and F.W Woolworth approached Corning Glass Company of N.Y. in hopes of finding a better way to produce the glass ornaments. Corning successfully modified their glass ribbon machine (used to make light bulbs) to produce the ornaments.

Woolworth ordered over 235,000 ornaments and in 1939 the first mass-produced, machine lacquered ornaments were created and sold in Woolworth’s Five-and-Dime stores costing- two to ten- cents each. Corning was producing over 300,000 ornaments a day instead of the 600 glass-blown ornaments made in Germany per day; this helped make F.W Woolworth a very wealthy man. Almost every home in America had Shiny Brite ornaments of their tree from the 1940s-1950s. Post-WWI, Shiny Brite became the largest ornament manufacturer in the world.

Pre-WWII, Eckardt produced his ornaments under the trade name “Shiny Brite.” The ornaments were silvered on the inside as well as the outside to create a quality shiny ornament to enjoy for years. When WWII began, metal and lacquer shortages followed; the ornaments manufactured during this period were usually clear or opaque and painted in pastel-colored stripes. The metal cap used to hang the ornament was changed to cardboard without hooks to hang them. These ornaments are hard-to-find.

In the early 60s, artificial trees became popular to own, which seemed to coincide with the introduction of cheaper plastic tree ornaments; ultimately this led to the Shiny Brite Company closing its doors in 1962.

Tip: When looking for these holiday treasures, be careful of the newer replicas, and thoroughly check the ornaments for damage before purchasing them. In closing, I believe this lone vintage 1950’s Shiny Brite stencil ornament says it all!