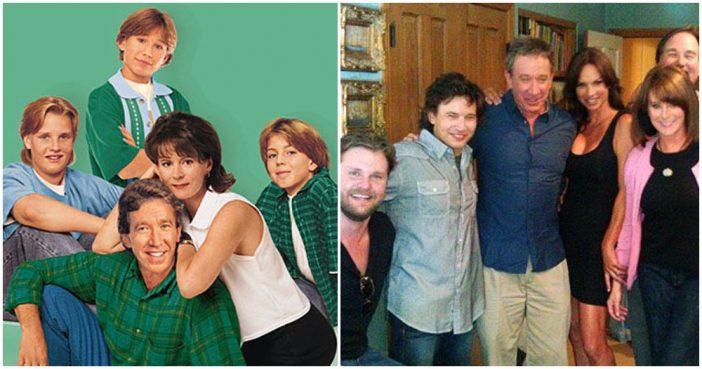 Then: The part of youngest brother Mark Taylor on ‘Home Improvement’ was Taran Noah Brown’s big break. He was seven-years-old when he got the part.

Now: Brown says one thing he definitely learned from ‘Home Improvement’ is that he did not want to be an actor for the rest of his life. For a while, he and his (now ex-) wife ran a company that made vegan cheese. He was arrested on suspicion of DUI and possession of marijuana last year.

Then: After years in New York trying to catch a break, Richard Karn’s wife talked him into moving to Los Angeles. It was there, while working as an apartment complex manager, that Karn met an agent at a traffic school who told him about the audition for ‘Home Improvement.’ Karn scored the role after ‘Groundhog Day’ star Stephen Tobolowsky had to drop out due to scheduling conflicts. Initially a small role, Al eventually became a major part of the show.

Now:  In the years since, Karn has hosted ‘Family Feud’ and ‘Bingo America.’ He’s also co-written two home improvement books ( on the topic of actual home improvement, not the show).

Then: When she was cast as the glamorous assistant that would replace Pamela Anderson’s character for show-within-a-show ‘Tool Time,’ Debbe Dunning was probably best known as Louise, the “Run for the Border” girl in a bunch of Taco Bell commercials. She had also appeared in an episode of ‘Married … With Children’ and in the movie ‘Dangerous Curves.’

Now: Dunning was the champion of the ‘American Gladiators’ Celebrity Challenge two years in a row. She is married to volleyball player Steve Timmons.

Then: When Pam Anderson was cast as the original ‘Tool Time’ girl on ‘Home Improvement,’ she was already relatively well-known for wearing a tight-fitting t-shirt to a ball game and, subsequently, a Playboy centerfold.

Now: After two seasons on ‘Home Improvement,’ Anderson left to pursue work on ‘Baywatch.’ These days, in addition to appearing on three different versions of ‘Dancing With the Stars,’ Anderson primarily makes small guest appearances as herself and advocates for animals rights.