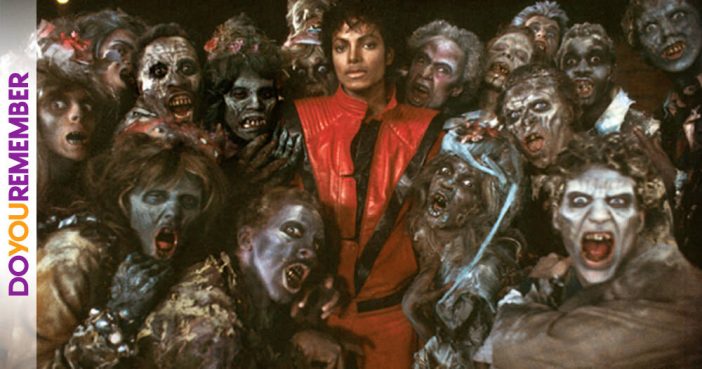 “Thriller” is a song recorded by American singer Michael Jackson, composed by Rod Temperton, and produced by Quincy Jones. It is the seventh and final single released from Jackson’s 1982 studio album Thriller. A 14-minute video showing Jackson in a Halloween-themed performance premiered on 14 November 1983, in Los Angeles, California.

In the song, sound effects such as a creaking door, thunder, feet walking on wooden planks, winds and howling dogs can be heard, a creepy voice-over from actor Vincent Price.and the lyrics contain frightening themes and elements.

The “Thriller” video was adapted by “American Werewolf In London” director John Landis into a highly successful music video, known independently as “Michael Jackson’s Thriller”. At fourteen minutes the video is substantially longer than the song, which ties together a narrative featuring Jackson and actress Ola Ray in a setting heavily inspired by horror films of the 1950s. In the video’s most iconic scene, Jackson leads other actors costumed as zombies in a choreographed dance routine. Though it garnered some criticism for its occult theme and violent imagery, the video was immediately popular and received high critical acclaim, being nominated for six MTV Video Music Awards in 1984 and winning three. In 2009 it was added to the National Film Registry by the Library of Congress, the first music video ever selected.

It’s close to midnight and something evil’s lurking in the dark
Under the moonlight you see a sight that almost stops your heart
You try to scream but terror takes the sound before you make it
You start to freeze as horror looks you right between the eyes,
You’re paralyzed

They’re out to get you, there’s demons closing in on every side
They will possess you unless you change the number on your dial
Now is the time for you and I to cuddle close together
All thru the night I’ll save you from the terrors on the screen,
I’ll make you see

Vincent Price:
Darkness falls across the land
The midnite hour is close at hand
Creatures crawl in search of blood
To terrorize y’awl’s neighbourhood
And whosoever shall be found
Without the soul for getting down
Must stand and face the hounds of hell
And rot inside a corpse’s shell
The foulest stench is in the air
The funk of forty thousand years
And grizzly ghouls from every tomb
Are closing in to seal your doom
And though you fight to stay alive
Your body starts to shiver
For no mere mortal can resist
The evil of the thriller
Can you dig it?!

Previous article: Where Have All The Gestures Gone?
Next Post: Opposite Day