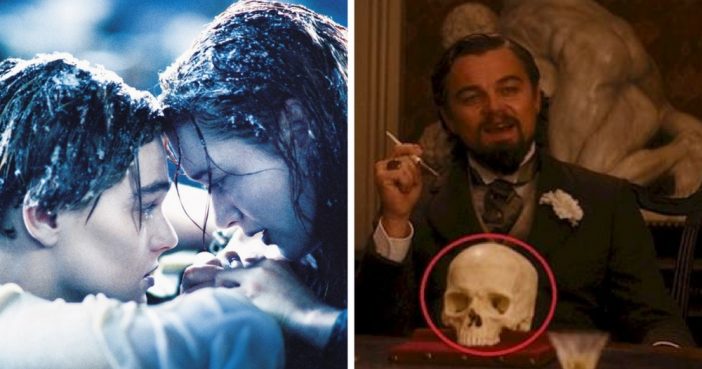 Quick! If I asked you to name 10 Leonardo DiCaprio movies, you could probably do it within seconds. Not only that, it’s pretty hard to name a bad movie that he’s done. He’s been in so many great films during his career and chances are you’ve seen most of them. But even the best movies have mistakes in them. Here are 17 mistakes from Leo’s movies that you might have missed.

I think I know why she did, in fact, let go of Jack at the end. Jack played by Leonardo Dicaprio in Titanic must have been such a confused man and that too at the most inconvenient of times. Who knew Jack was such a diva? Fashion should have been the least of Jack’s concern when the Titanic was capsizing. He couldn’t decide whether or not he wanted to keep the suspenders on!

2. Inception: Even the Totem Can’t Make up its Mind

The totem.. the iconic totem from the movie. the ONE THING which is the basic signifier for people in this movie to differentiate between dream and reality… Yes, that one… Even that crucial element in this brilliant movie was unable to decide whether to stay upside down! My, oh my Leo. You’re a bad influence.

The next one was a minuscule mistake that went unchecked while shooting. Probably overlooked by most people but some eagle-eyed viewers will find mistakes where they exist. In the psychological thriller which was an international hit, a scene shows Leo being handed a note written by one of the patients at the facility. In the long shot, you see the person writing on the left side of the notebook but when the shot cuts to the (slowly maddening yet still utterly handsome) detective reading the note, it’s written on the right side. No wonder Leo’s character was in doubt about his sanity most of the film!

4. The Great Gatsby: Keeping Your Enemies Close… A little too Close

The Great Gatsby was one movie loved universally. A lot of people even made links between the mysterious character that Leonardo Dicaprio played in this movie to Jack from Titanic (I still think he should have used some common sense to avoid freezing to death. What an idiot!). A well-established rivalry formed between Gatsby and his childhood lover’s husband for her heart. That made the two enemies and you know what they say about enemies, you should keep them close. Well, these two took it to heart in this particular scene where they move closer together between shots.

5. The Aviator: If it’s Broken, Break it Again!

A not-so-inconspicuous mistake or just plain old apathy? This scene from the movie Aviator shows Leo and another person break the support of one of the wings on the airplane causing the wing to break. What they did not account for was the fact that the wing was already visibly broken (probably from a previous take). Clearly, they made the least amount of effort while filming to conceal it. Mighty careless, if you ask me.

6. Romeo and Juliet: Leo’s Hair Does Look Good Pushed Back

This was one of DiCaprio’s earlier films. One of the best performances he has given which contributed to his meteoric rise to fame. Just a minor continuity mistake made by the hairdresser on set which is easily forgivable but one that has to be mentioned because that is what this whole article is dedicated to! Romeo’s hairstyle changes magically when the camera angle changes as he’s staring at the beautiful fishes in the aquarium while contemplating his life choices. I get it, everyone likes his hair pushed back but they could have let it be if not anything but for the sake of continuity!