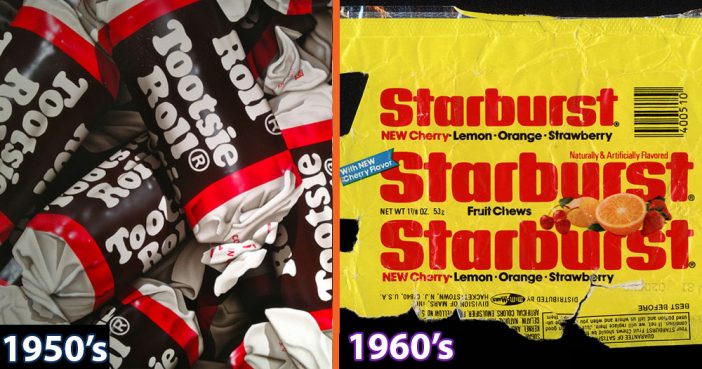 Candy was always on my mind as a kid. If I had it, I was planning and hiding and snacking! If I was void of my candy stash, I was trying to collect change in order to get some popular candy at the local five and dime!

We went to the experts. Morris Cohen opened Economy Candy in Manhattan in 1937 after his candy cart (outside of his hat and shoe repair shop, naturally) started bringing in more money than the hats and shoes. Morris’ son, Jerry, took it over in the ’80s, and now Jerry’s son Mitchell is in charge alongside his wife, Skye. Needless to say, the family has been in the candy business for a long time and know a thing or two about all that sweet stuff. I talked to Mitchell and Skye about trends over the years and the candies that were the most popular of their decade, though that’s hard to quantify for absolute certain, these were the ones that were emblems of their era.

1900s: Chocolate Migrates to the States

The Hershey’s Milk Chocolate Bar was invented by Milton Hershey, a man who, after dropping out of school after 4th grade and being fired from his job at a newspaper printer, delved into the world of candy making. He first mastered the art of caramel, which was booming at the end of the 1800s. But as the excitement around caramel waned at the turn of the century, Hershey was already onto the next big thing: chocolate. In particular, he had a feeling that milk chocolate, which Europeans were crazy for, would take off in America.

He sold his caramel company, invested in a farm outside of Lancaster, PA, so he could have easy access to fresh milk, and proceeded to make what became the first mass-produced chocolate in the United States. I have a feeling you know how that turned out. Hershey’s Kisses followed seven years later and the Hershey’s Bar with almonds a year after that.

The ’20s saw the rise of the nut, in particular, the peanut. “In a way, it was the most obvious next step,” said Mitchell, “adding something that people were already snacking on to another thing they were snacking on.” In 1921, the Curtiss Candy Company refashioned its Kandy Kake into the Baby Ruth. To this day there is contention over whether it was named after President Grover Cleveland’s daughter, Ruth, or for the Babe Ruth, who was rising to fame.

Regardless, the bar became a favorite. Nut candies progressed with Butterfingers (the inside is made of pulsed-up peanuts!) in 1923, Reese’s Peanut Butter Cups in 1928, and Snickers in the early ‘30s.

This was the decade of candy inside of other candy (a novel idea at the time). The Cohens credit this in part to the fact that there seemed to be value in a two-candy-in-one deal during the Depression. “You were paying the same (or about the same) price as you would for a single type,” said Mitchell, “but getting more variety.” The Tootsie Pop made its debut in 1931 after the Tootsie Roll had been around for over 30 years. Early Tootsie Pop advertisements had instructions for fun eye tricks (like moving the physical piece of paper in front of your eyes in such a way that made it look like the images were moving), and then slogans like, “There’s more than meets the eye.” Clever.

There was also the popular Sky Bar, with caramel, vanilla, peanut, and fudge fillings in individual squares of a single chocolate bar, which came out in 1938. “You could buy one and split it among four people, with everyone getting whatever flavor they liked best,” noted Mitchell.

M&M’s were a wartime specialty. Forrest Mars Sr., the man who invented them, first encountered the concept of chocolate with a heat-resistant candy coating in the United Kingdom, where soldiers in the Spanish Civil War were given small chocolate beads surrounded by hard sugar as part of their rations. At the time, American chocolate sales declined in the summer months because of the heat, and Mars knew that this could be the way to solve that vexing problem. “M&M’s wouldn’t melt in your pocket on a hot day the same way a Hershey’s bar would,” said Skye.

The creation of M&M’s coincided with the States entering WWII and for the duration of the war, the candy was only supplied to the military. After the war ended, soldiers were hooked–and as soon as M&M’s became available to the public, everyone else was, too.

After the war ended and the economy was growing stronger, there was a turn toward nostalgic “penny candy,” the small, individually-wrapped candies that sold at general stores for, you guessed it, one cent a piece. “People were buying Lemon Heads and Tootsie Rolls and Fireballs–the kinds of things they had when they were kids,” Skye said.

“It’s because during the Great Depression and throughout WWII, most families didn’t have the money for extravagances like candy. By the time the ’50s rolled around, the economy had rebounded. And for many people, it was likely a point of pride to be able to provide treats for their children that they were unable to afford in their own youth.”

“In the ’60s the U.S. burst into color,” said Skye. “For the first time color printing, color dyes, and color paints were being made for the mass market. From advertising to fine art to fashion, color was everywhere. Candy needed to be colorful as well, otherwise, it would fade into the background and fall off the map.”

The best way to get color into candy is through all-sugar confections. Candy necklaces, Peeps, and Pixie Stix all hit the market in the ’50s, but it wasn’t until the ’60s that they really took off. Starburst was added to the mix in 1960, Sweet Tarts in 1962, and Zotz in 1968. “They’re undoubtedly appealing to the eye,” added Skye, “and are a way to make them stand out from the same old candies and chocolates that had already been around for generations.” And don’t forget about the Black Licorice Jelly Beans! They were not my favorite back then, but now I do enjoy them very much.

Continue on to the Popular Candy from ’70s and Beyond

Page Page 1 of 2
Previous article: Can You Guess What these Vintage Items were Used for?
Next Post: ‘Little House On The Prairie’ Cast Recall Working With Michael Landon