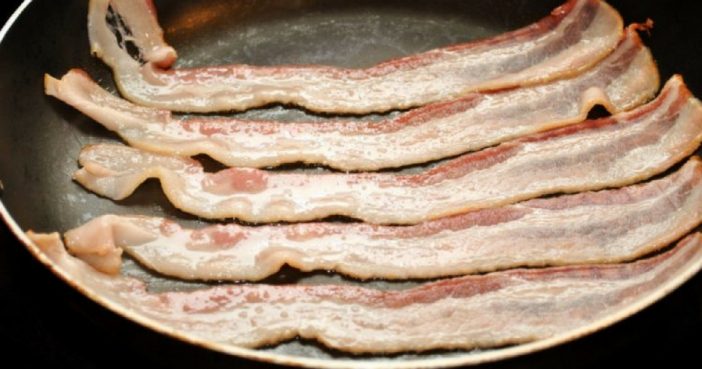 Cooking bacon can be a hassle. Oil splatters everywhere, some pieces get burnt while others come out underdone, and it’s an overall mess.

Fortunately, there is one trick that is said to not only make bacon easier to cook but will leave the strips both crisp and tender, rather than dry and crumbly.

And that trick is to simply cook it in water.

Wondering how this method will prevent the dreaded bacon splatter from happening? Of course, you are. It’s because the fat content in the bacon will almost completely render once the water you’re cooking it in reaches a boil.

So How Do You Cook Bacon In Water?

According to America’s Test Kitchen, place the bacon in just enough water to cover it in a skillet over high heat. At first, it might seem like there’s too much water in your skillet, but that additional water will help keep the cooking temperature low so the meat will retain its moisture, which ultimately leaves your bacon tender.

Once the water reaches a boil, you’ll want to reduce the heat to medium. When the bacon starts to turn crispy and appears to be well-browned, then it’s likely done cooking and ready to go.

Watch the video below for full instructions for cooking bacon in water:

There’s been a debate, though, about how much water you actually need to achieve this perfectly cooked bacon.

According to TheKitchn.com, it’s not necessary to completely cover the bacon slices with water. Not only will it take longer to bring the water to a boil, but you’ll likely achieve the same beautifully cooked strips by adding just enough water to cover the bottom of your skillet.

Perhaps this is a good excuse to cook bacon twice in the near future—you know, just to see which amount of water should be added to the skillet.

If you haven’t yet made the jump from cooking bacon on the stove or in the oven to the microwave—a whole new splatter-free world awaits you!

There are a bunch of microwave-safe bacon trays out there that help to cook bacon quickly and wick away grease at the same time, like the one below.

If you’re short on time and looking for an even easier clean-up than the method above, you should try this mess-free microwave method for your next bacon-making session.

If you don’t have a tray—or simply are looking for a way to cook bacon without having anything at all to clean afterwards—the YouTube video below will show you how it’s done.

This method uses paper plates and paper towels exclusively, so there’s literally nothing to clean up after you cook your bacon.

Plus there’s a sweet bonus: This method calls for you to arrange the bacon into heart shapes before popping it into the microwave.

As TipHero points out, you can replicate this bacon-making approach with any microwave-safe plate if you don’t have paper plates on hand or want to reduce waste.

Previous article: 12 Weird Things You Didn’t Know Your Body Could Do
Next Post: 9 Creepy Events That Actually Happened On Halloween